Life Is a Joke: 100 Life Lessons (with Punch Lines) (Paperback) 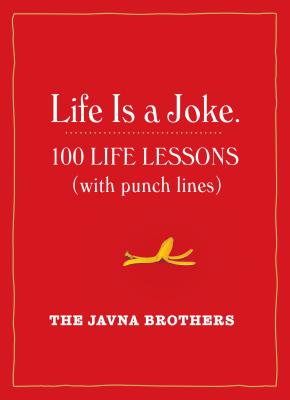 Life Is a Joke: 100 Life Lessons (with Punch Lines) (Paperback)


Not On Our Shelves—Ships in 1-5 Days
The wit and wisdom of jokes. In that order.

Did you hear the one about the man who was convinced he was dead?

It’s a classic, and like the 99 other joke in this book, you’ll delight in the reading and even more in the telling. There’s also the one about Einstein and his chauffeur. The woman who went on vacation and left her pet cat with her sister. The farmer with the three-legged pig.

But when the laughter settles, something else happens. In the masterful hands of the Javna brothers, each joke reveals insights into human behavior—and tips for putting that insight into action—that you’ll want to share as readily as the jokes themselves.

The Javna brothers (Gordon & John) are founders of the Bathroom Reader’s Institute and creators of the bestselling Uncle John’s Bathroom Reader series (more than 15 million copies in print). Gordon was publisher and editor-in-chief of Portable Press and The Bathroom Readers’ Institute from 2000 to 2016. John has written dozens of books on pop culture and the environment, and founded EarthWorks Press in 1989. His book 50 Simple Things You Can Do to Save the Earth sold 5 million copies and was a #1 New York Times bestseller in 1990. Writing as the EarthWorks Group, he has sold over 10 million books on environmental activism.