My American Dream: A Life of Love, Family, and Food (Hardcover) 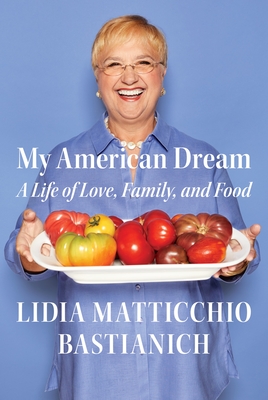 My American Dream: A Life of Love, Family, and Food (Hardcover)


Not On Our Shelves—Ships in 1-5 Days
For decades, beloved chef Lidia Bastianich has introduced Americans to Italian food through her cookbooks, TV shows, and restaurants. Now she tells her own story for the first time in this “memoir as rich and complex as her mushroom ragú" (O, the Oprah Magazine).

Born in Pula, on the Istrian peninsula, Lidia grew up surrounded by love and security, learning the art of Italian cooking from her beloved grandmother. But when Istria was annexed by a communist regime, Lidia’s family fled to Trieste, where they spent two years in a refugee camp waiting for visas to enter the United States. When she finally arrived in New York, Lidia soon began working in restaurants, the first step on a path that led to her becoming one of the most revered chefs and businesswomen in the country. Heartwarming, deeply personal, and powerfully inspiring, My American Dream is the story of Lidia’s close-knit family and her dedication and endless passion for food.
Lidia Matticchio Bastianich is an Emmy Award–winning Public Television host and best-selling author of eleven cookbooks and three children’s books. She is the chef/owner of four acclaimed New York City restaurants—Felidia, Becco, Esca, and Del Posto. With her daughter, Tanya Bastianich Manuali, she operates Lidia’s Pittsburgh and Lidia’s Kansas City. She runs Becco, Esca and Del Posto with her son, Joe Bastianich. She opened Eataly, the largest artisanal Italian food and wine marketplace, in New York City, Chicago, Boston, Los Angeles, and São Paulo, Brazil, with Joe and others. She is also, with Tanya, co-founder and president of Tavola Productions and has her own pasta and sauce line sold nationwide. www.lidiasitaly.com
"A touching (and timely) read."
—New York Journal of Books

"It paints a loving and often mouth-watering picture of her culinary adventures."
—Pittsburgh Post-Gazette

"Restaurateur, cookbook author, and TV host Bastianich offers an ebullient, nostalgic memoir of her journey to success... A warm story of a life buoyed by resilience, determination, love of family, and food."
—Kirkus

"Chef and restaurateur Bastianich offers a look into her culinary background in this charming memoir… Through her lyrical prose, she also encourages readers to find the bright side of any situation. This is a welcome addition to any food lover’s library."
—Publisher’s Weekly

"In this memoir, restaurateur, television star, and cookbook author Bastianich personifies the American dream. …the grande dame of Italian cooking in America... Bastianich’s story holds even more significance for her triumph in a male- dominated industry."
—Starred Booklist Review