Me and Muhammad Ali (Hardcover) 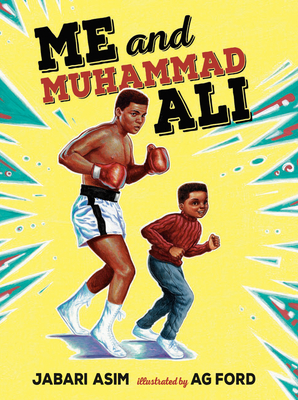 Me and Muhammad Ali (Hardcover)


On Our Shelves Now at:
A little boy’s joyous encounter with his hero, boxing champion and poet Muhammad Ali, is everything he’s dreamed of—and more!

Like most of the kids he knows, Langston is a huge fan of boxing champ Muhammad Ali. After all, Ali is the greatest for so many reasons—his speed, his strength, his confidence—and his poetry. Langston loves that Ali can float like a butterfly and sting like a bee, and Ali’s words give him confidence to spin his own poems. When Langston hears the champ is coming to the local high school, he’s ecstatic—this will be a day that will go down in history for him. When the big day arrives, Langston gets a special haircut, and floats like a butterfly to meet his hero—so imagine his disappointment when a guard tries to stop him at the door, saying the event is just for students. Fortunately, Langston has learned a thing or two about fearlessness from the champ and is quick about not taking “no” for an answer. And just like that, a dream comes true for Langston that leaves him feeling wrapped in a warm glow and chanting I’m quick and I’m strong. I’m Black and I’m free. I’m brave and I’m bold, like Muhammad Ali!
Jabari Asim (therealjabariasim.com) is an accomplished poet, playwright, and writer, and has been described as one of the most influential African American literary critics of his generation. Asim has served as the editor-in-chief of Crisis magazine—the NAACP’s flagship journal of politics, culture, and ideas—and as an editor at The Washington Post. He is the recipient of a Guggenheim Fellowship in Creative Arts and is the author of many award-winning books for adults and children, including Preaching to the Chickens (art by E.B. Lewis), which was a New York Times Best Illustrated Book. He is an Associate Professor of writing, literature, and publishing at Emerson College in Boston, Massachusetts.

AG Ford (agfordillustration.com) is a three-time New York Times bestselling children's book illustrator and recipient of two NAACP Image Awards. He has illustrated picture books by Kareem Abdul-Jabbar, Sharon Robinson, Ilyasah Shabazz, Martin Luther King III, Nick Cannon, Jonah Winter, and Archbishop Desmond Tutu. He lives with his family in Frisco, Texas.
“From the Wall of Respect to the joyful schoolyard to the barbershop full of people, this is a delightful depiction of a close-knit African American community finding inspiration in one of its greatest legends. The poetic text is an enjoyable read-aloud, and Ford generates excitement on each page with a combination of movement-based portraits, community scenes, and expressive faces. This bundle of Black joy belongs on every bookshelf.” —Kirkus Reviews

“Asim's vivid prose captures the spirit and enthusiasm associated with the charismatic Ali, and local setting details, including the Wall of Respect mural and the local barbershop, are evocatively described. The text also incorporates several original rhymes composed in Ali's style. Ford's vibrant illustrations, rendered in acrylic and colored pencil, feature rich hues filled with many setting details. Several spreads also highlight Ali's athleticism and agility, expressed in multicolored zigzags, starbursts, and exclamations. An author's note explains the many reasons Ali was revered and describes the 1975 incident that inspired this story.” —Booklist

“Based on a real experience, this is a lovely little ode to meeting your heroes . . . the celebratory tone is infectious. References to other Black athletes and historical figures, as well as the Wall of Respect mural in Chicago bring context. . . . Ford’s illustrations, rendered in acrylics and colored pencils, shine with depth and texture . . . joyous expressions and saturated backgrounds maintain visual appeal. Fans of boxing and/or the ‘The Greatest’ are the obvious audience here, but this is also a cheerful slice-of-life look at a Black community in 1970s Chicago.” —The Bulletin of the Center for Children’s Books

“The illustrations in colored pencil and acrylic vibrate with energy. The people and neighborhood are shown in detail and convey everyone’s personality. An author’s note explains why Ali appealed to Asim, and that Langston’s experience was based on how his own mother met the champ. . . . A delightful story about meeting one’s hero and feeling empowered by it, this heartwarming book is a strong first purchase and is bound to be a story hour hit.” —School Library Journal

“The lively third-person narrative and the bright acrylic and colored-pencil illustrations are a one-two punch that will hook readers. An author’s note adds more information about Ali’s influence and explains the story’s roots in an actual event.” —Horn Book