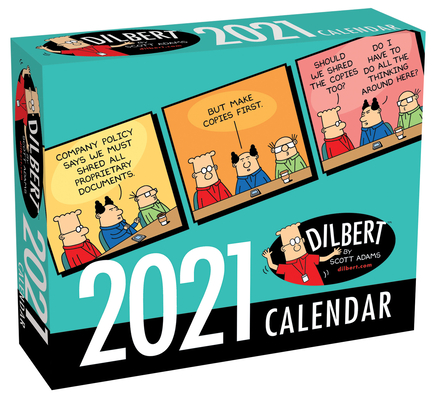 
Special Order—Subject to Availability
(This book cannot be returned.)
Pointless projects, endless meetings, bonehead strategies and all manner of corporate craziness turn into cartoon gold in this all-new calendar featuring a year’s worth of comic strips from Dilbert.

The Pointy-Haired Boss might have stumbled onto something. He assigns one idiot to each project to keep them from bunching together. Dilbert, Alice, and Wally might dispute that there's only one, but they're painfully aware that they exist and that sometimes they're each other. Watch them navigate the pitfalls and policies of corporate life in the Dilbert strips featured on the daily pages of this calendar, where the only bunching is their frustration with lazy coworkers.

What started as a doodle has turned Scott Adams into a superstar of the cartoon world. Dilbert debuted on the comics page in 1989, while Adams was in the tech department at Pacific Bell. Adams continued to work at Pacific Bell until he was voluntarily downsized in 1995. He has lived in the San Francisco Bay Area since 1979.