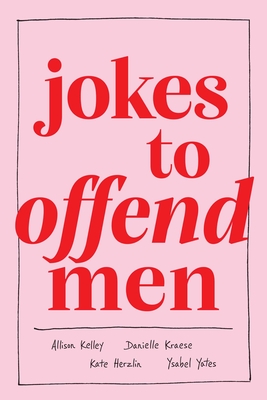 
On Our Shelves Now at:
A modern, feminist take on the classic joke book to amuse and empower readers who are tired of being the punchline.

A man walks into a bar. It’s a low one, so he gets a promotion within his first six months on the job.

Four comedy writers transform classic joke setups into sharp commentary about the everyday and structural sexism that pervades all facets of life. Jokes to Offend Men arms readers with humorous quips to shut down workplace underminers, condescending uncles, and dismissive doctors, or to share with their exhausted friends at the end of a long day. A cutting, cathartic spin on the old-fashioned joke book, Jokes to Offend Men is a refreshing reclamation of a tired form for anyone who's ever been told to "lighten up, it's just a joke!"

Allison Kelley, Danielle Kraese, Kate Herzlin, and Ysabel Yates are humor and satire writers based in New York City. Their work has been featured in such publications as The New York Times, The New Yorker, Reductress, McSweeney's Internet Tendency, and more.
What’s more “comedy book” than the original comedy book, the good ol’ joke book? Yeah, Jokes to Offend Men is a joke book, but it reinvents the subgenre by taking it to a whole new level. This is a joke book with a thesis, with the gags to back it up and bring the reader on a very satisfying ride. This is the rare occasion when pointed satire is delivered with as much glee as rage, and the material here just crackles — unabashedly vicious, hilarious, and precisely pinpointed vitriol directed at the all-too-familiar awful men who deserve to be lambasted and shamed. Not a single gag falls flat; it’s just one kill shot after another. For example: “Why are the men at my job like parrots? Because they repeat everything I say, poorly.” (Brian Boone, Vulture)