Maradona: The Hand of God (Paperback) 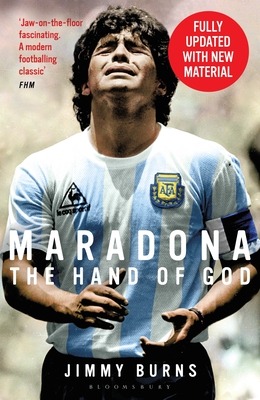 Maradona: The Hand of God (Paperback)

The definitive biography of Maradona, fully updated with new material following his death in 2020.

Anyone doubting that Diego Maradona was more than just a soccer player had only to witness the outpourings after his death on November 25th 2020. During his tempestuous life and career, he played for top clubs in South America and Europe, notably Napoli where he became an adored hero and adopted son, and grew to be a legend in his homeland of Argentina after leading them to victory in the 1986 World Cup.

Having gained access to his inner circle, Jimmy Burns traces Maradona's life from the slums of Buenos Aires, where he was born, through his great years of triumph, to the United States from where, in 1994, he was ignobly expelled after undergoing a positive drugs test. He also tells of his failed attempt to bring further glory to Argentina as coach in the 2010 World Cup, and ultimately, his tragic decline and recent death.

Never before published in the U.S., this biography is widely regarded as the best and most revealing account of the highs, lows, genius and flaws of arguably the greatest soccer player of all time, and was the inspiration for Asif Kapadia's award-winning 2019 film Diego Maradona.

Jimmy Burns is a prize-winning author and journalist. Among his books are The Land that Lost its Heroes (winner of the Somerset Maugham prize for nonfiction), Barça: A People's Passion, Papa Spy, La Roja, Pope of Good Promise, and Cristiano & Leo. He lives in London with his wife and two daughters.

“If [those interviewed in this book] are my friends, I prefer to have enemies” —Diego Maradona

“Burns' forensic skills are to the fore in this deft, perceptive study of politics, corruption, exploitation and the occasional dash of genuine sporting genius” —Time Out

“Illuminating and atmospheric as it cuts through the web of myth, mystery and full-blooded hypocrisy” —Irish Times

“Maradona's life is one of grotesque farce ... Gazza's career compared with this looks like Emmerdale sat next to the Borgias” —Peter Davies, author of All Played Out

“A compelling cocktail of celebration and cheating” —Daily Mail

“I finished it thinking how great it would be to make something on Diego Maradona” —Asif Kapadia, director of the award-winning film Diego Maradona

“Love or hate the man, his is one of football's greatest stories and so this is the best football book in ages” —Goal

“The definitive work on Diego Maradona” —The 42