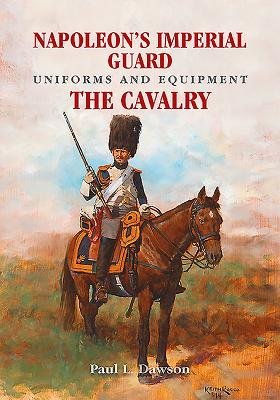 
Special Order—Subject to Availability
Few military formations have attracted more attention than Napoleon's Imperial Guard, and fewer still have been so extravagantly clothed and accoutred with the finest materials and the brightest colours. On both campaign and parade, the Guard, and especially the cavalry regiments, provided a dazzling display of military grandeur. From the green and gold trappings of the Chasseurs Cheval, to the multi-coloured Mamelukes, the Guard cavalry was among the most brilliantly dressed formations ever to grace the field of battle.

In compiling this magnificent volume, the author has collected copies of almost all the surviving documents relating to the Guard, which includes a vast amount of material regarding the issuing of dress items, even in some instances down to company level.

This information is supported by around 100 contemporary prints, many of which have never been published before, as well as images of original items of equipment held in museums and private collections across the globe. In addition, the renown military artist, Keith Rocco has produced a series of unique paintings commissioned exclusively for this book.

This glorious book is, and will remain, unsurpassed as the standard work on the clothing and equipment of the Cavalry of the Imperial Guard, and will be eagerly sought by reenactors, wargamers and modellers, and will sit on the book shelves of historians and enthusiasts as one of the most important publications ever produced on this most famous of military formations.