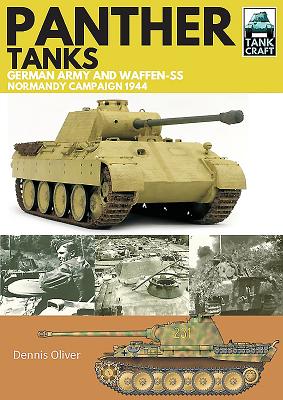 This is book number 3 in the Tankcraft series.

Central to the German strategy of dealing with an Allied landing in France was the availability of a strong, mobile armored reserve. In June 1944, as part of this force, the Army in the West was able to deploy over 300 Panther tanks, perhaps the best armored fighting vehicle produced by Germany during the Second World War. British and American tank crews found to their horror that the Panthers could often survive numerous hits while a single round from one of their 75mm guns was enough to destroy any enemy tank. In his book, his third in the TankCraft series, Dennis Oliver uses archive photographs and painstakingly researched, exquisitely presented color illustrations to examine the part these powerful tanks played in the Normandy battles and also the battalions that operated them. As with previous titles in the TankCraft series, a large part of this book showcases available model kits and after market products and accessories, complemented by a gallery of skillfully constructed and painted models.