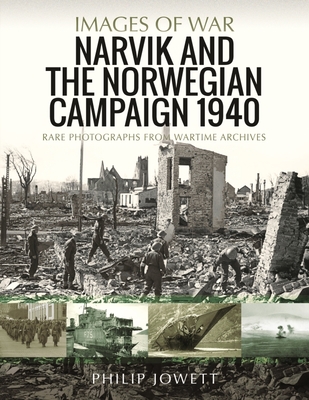 
Not On Our Shelves—Ships in 1-5 Days
The Norwegian campaign, fought in 1940, early in the Second World War in Europe, is overshadowed by the campaign in Poland that preceded it and the German blitzkrieg in the Low Countries and France that followed, yet it was a close contest from the military point of view and it had a far-reaching impact on the rest of the war. Philip Jowett's photographic history is a vivid introduction to it.

In a concise text and a selection of over 150 photographs he traces the entire course of the fighting in Norway on land, at sea and in the air. He describes how important it was for the Allies - the Norwegians, British and French - to defend northern Norway against the Germans, in particular to retain control of the strategic port of Narvik.

The book documents in fascinating detail the troops involved, the aircraft and the large naval forces, and gives an insight into the main episodes in the conflict including the struggle for Narvik and the major clashes at sea which culminated in the loss of the Royal Navy's aircraft carrier Glorious.

The photographs are especially valuable in that they show the harsh conditions in which the fighting took place and offer us a direct impression of the experience of the men who were there.