Empire in Black and Gold (Shadows of the Apt #1) (Paperback) 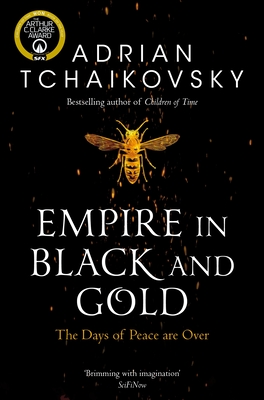 Empire in Black and Gold (Shadows of the Apt #1) (Paperback)

Empire in Black and Gold is the first instalment in the critically-acclaimed fantasy series Shadows of the Apt. It’s brought to you by Adrian Tchaikovsky, winner of the Arthur C. Clarke Award.

The city states of the Lowlands have lived in peace and prosperity for decades, hailed as bastions of civilization and sophistication. That peace is about to end.

Far from the Lowlands, an ancient empire has been conquering city after city with its highly trained armies and sophisticated combat techniques. Now it's set its sights on a new prize.

Only the ageing Stenwold Maker – spymaster, artificer and statesman – can see the threat. So it falls upon his shoulders to open the eyes of his people. For war will sweep across their lands, burning away everything in its path. Yet first, he must stop himself from becoming the empire's latest victim.

Empire in Black and Gold is followed by the second book in the Shadows of the Apt series, Dragonfly Falling.

Adrian Tchaikovsky was born in Woodhall Spa, Lincolnshire, and headed off to university in Reading to study psychology and zoology. For reasons unclear even to himself, he subsequently ended up in law. Adrian has since worked as a legal executive in both Reading and Leeds and now writes full time. He also lives in Leeds, with his wife and son. Adrian is a keen live role-player and occasional amateur actor. He has also trained in stage-fighting and keeps no exotic or dangerous pets of any kind – possibly excepting his son.

Adrian is the author of the critically acclaimed Shadows of the Apt series, the Echoes of the Fall series and other novels, novellas and short stories. The Tiger and the Wolf won the British Fantasy Award for Best Fantasy Novel – and Children of Time won the Arthur C. Clarke Award for Best Science Fiction Novel. This was in the award’s thirtieth anniversary year.

"There is a continual sense of urgency and danger, yet there is also time for love and friendship. The story is quickly paced, more than keeps one’s interest, and leaves one looking forward to the next book of Shadows of the Apt to learn more about the characters and how the conflict develops " --Booklist

"Longtime epic fantasy readers will find many familiar elements in this intriguing debut. . . . Tchaikovsky exercises considerable talent in assembling these well-worn pieces into a new puzzle, developing an interesting story and world with humor and skillful prose. Readers may be pleasantly surprised to find themselves looking forward to future installments." --Publishers Weekly