The Dance of the Caterpillars Bilingual Danish English (Paperback) 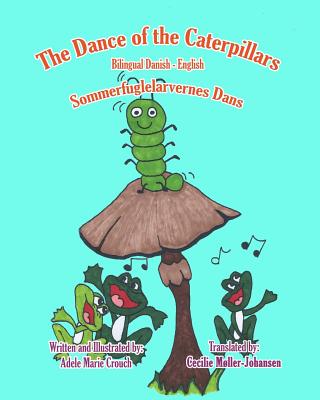 The Dance of the Caterpillars Bilingual Danish English (Paperback)


Not On Our Shelves—Ships in 1-5 Days
(This book cannot be returned.)
While watching her Chinese immigrant son-in-law learn the English language, it became apparent to the author that prepositions are one of the most difficult concepts to comprehend. Therefore, The Dance of The Caterpillars was written as a fun way to teach prepositions. This exciting children's book contains twenty-two prepositions, one two-word multiple, and two three-word multiples. It is destined to become a valuable learning tool for children as well as English as a second language students. Danish dansk, dansk sprog, is a North Germanic language spoken by around six million people, principally in Denmark and in the region of Southern Schleswig in northern Germany, where it has minority language status. There are also minor Danish-speaking communities in Norway, Sweden, Spain, the United States, Canada, Brazil and Argentina. Due to immigration and language shift in urban areas, around 15-20% of the population of Greenland speak Danish as their home language.
Adele is a published author. Catherine's Travels - Book I and Catherine's Travels - Book 2, Lawson's Search, are historic novels. How the Fox Got His Color and Where Hummingbirds Come From are children's picture books. The Dance of The Caterpillars, which she illustrated herself, is a lesson in prepositions with pictures written for 2nd grade level readers. The Gnome's of Knot-Hole Manor is a chapter book using words with silent letters and words that are spelled differently and sound the same. Her newest release, Alphabet Alliteration, is a new twist on learning A B C's. All of Adele's books are available through her web site (http: //www.creationsbycrouch.com ) and Amazon. Her children's picture books are available bilingual in numerous different languages. Adele Crouch is also a self-taught artist, working in: Acrylics, Oils, Colored Pencils, Graphite and Charcoal. She has been selling her work for more than 40 years. During the last 30 years, Adele has sold and displayed her work in galleries and other businesses in northern and southern California, Washington, Idaho, Tennessee, Arkansas, New Mexico and Arizona. Her interest in art was inspired by a history lesson which featured Michelangelo when she was nine years old. Three of Adele's relatives, her grandfather and two aunts, were artists. This helped in giving her incentive to study and enhance her abilities in the field.