Have You Seen Gordon? (Hardcover) 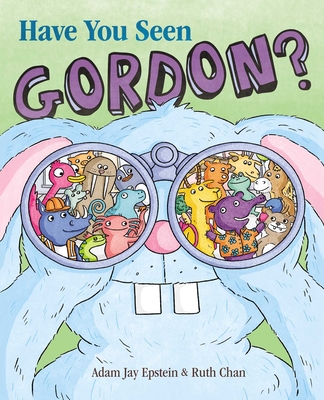 Have You Seen Gordon? (Hardcover)

Packed with vibrant and dizzying artwork, this hilarious story cleverly riffs on classic seek-and-find books and will have young ones laughing out loud as the narrator struggles to get the characters to play along.

Have you seen Gordon? Oh. There he is. Gordon isn’t very good at hiding, is he?

The narrator wants to play hide and seek with Gordon and the reader, but Gordon just wants to stand out. This madcap, fourth wall–breaking picture book is packed with humor and full, zany spreads with details kids will return to again and again.
Adam Jay Epstein spent his childhood in Great Neck, New York, when he wasn’t held captive aboard his father's sailboat. He spent many days sitting in the neighborhood park, travelling to fantasy lands in his head (occasionally when he was supposed to be doing his homework). In college, he circled the world on a ship and studied film at Wesleyan University. He is the author of the series Snared and Have You Seen Gordon? and the coauthor of the internationally bestselling middle grade fantasy series The Familiars and the Starbounders series. He has written film and television projects for Disney, Sony, Fox, MGM, Paramount, MTV, Hulu, Syfy, and Disney Channel. He currently lives in Los Angeles with his wife, two daughters, and dog, Pixel.

Ruth Chan is an illustrator and author who spent her childhood tobogganing in Canada, her teens in China, a number of years studying art and education, and a decade working with youth and families in underserved communities. She now writes and illustrates full time in Brooklyn, New York. Visit OhtRuth.com for more info.
"It’s a culturally relevant meta-spoof that raises big questions about authority and autonomy, allyship and consent... It also succeeds wholly in the seek-and-find genre; while readers catch their breath from the high-energy character wrangling, they can pore over a wonderfully wide-ranging supply of visual jokes (e.g. poop as fine art) en route to the book’s sweetly affirming end."
— Publishers Weekly, starred review

"Riotously written and wittily illustrated with plenty of details for kids to savor, this charmer will keep readers laughing and looking. Seek no more for words to describe this winner: a standout!"
— Kirkus Reviews, starred review