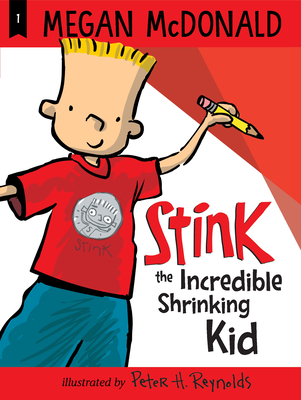 This is book number 1 in the Stink series.

In honor of Judy Moody's younger "bother," the creators of the award-winning series have put themselves in a very Stink-y mood.

Every morning, Judy Moody measures Stink and it's always the same: three feet, eight inches tall. Stink feels like even the class newt is growing faster than he is. Then, one day, the ruler reads — can it be? — three feet, seven and three quarters inches! Is Stink shrinking? He tries everything to look like he’s growing, but wearing up-and-down stripes and spiking his hair aren't fooling anyone into thinking he's taller. If only he could ask James Madison — Stink's hero, and the shortest person ever to serve as President of the United States.

In Stink's first solo adventure, his special style comes through loud and strong — enhanced by a series of comic strips, drawn by Stink himself, which are sprinkled throughout the book. From "The Adventures of Stink in SHRINK MONSTER" to "The Adventures of Stink in NEWT IN SHINING ARMOR," these very funny, homespun sagas reflect the familiar voice of a kid who pictures himself with super powers to deal with the travails of everyday life — including the occasional teasing of a bossy big sister!
Megan McDonald is the author of the popular and award-winning series starring Judy Moody. She says, "Once, while I was visiting a class full of Judy Moody readers, the kids, many with spiked hair à la Judy's little brother, chanted, 'Stink! Stink! Stink! Stink! Stink!' as I entered the room. In that moment, I knew that Stink had to have a book all his own."

Peter H. Reynolds is the illustrator of all the Judy Moody books. He says, "I've fallen in love with the whole cast of characters in the world of Judy Moody, but Stink has always been a favorite of mine. He reminds me of myself growing up: dealing with a sister prone to teasing and bossing around — and having to get creative in order to stand tall beside her."
Delightful full-page and spot-art cartoons and playful language in large type bring the child's adventures to life. 'Things are definitely looking up, up, UP' with this bright addition to beginning chapter-book collections.
—School Library Journal

The narrative is fun and laced with puns-from Mr. Trashmore to "newt in shining armor," and it's peppered with black-and-white illustrations, including comics reflecting Stink's triumphant fantasies.
—Booklist

Readers of Judy Moody who requested that Stink have a book of his own will not be disappointed.
—Bulletin of the Center for Children's Books

A humorous look at the emotional trauma a second-grader experiences at the thought of growing smaller, rather than growing taller.
—Times-Picayune

With child-savvy humor and energy, McDonald explores Stink's frustrations with being 'the shortest second-grader in Class 2-D. Probably the shortest human being the in whole word, including Alaska and Hawaii.'
—Child

Hilarious…Set them loose on the rest of the series, and ZOOM, they're reading and loving it!
—Readkiddoread.com