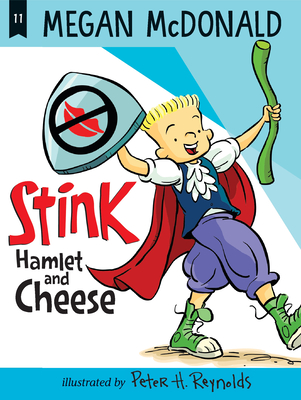 This is book number 11 in the Stink series.

It’s spring break, and Stink is faced with a difficult choice: hang out at home with his sister, Judy, or become a Shakespeare Sprite with his friend Sophie of the Elves. Hanged be! When Sophie tells Stink that there will be swordplay and cursing at Shakespeare camp, his choice is made. But wait! How now? The eager young thespian hadn’t counted on Riley Rottenberger being a Sprite, too. And he positively had not counted on being the only boy! Fie upon’t!
Megan McDonald is the creator of the popular and award-winning Judy Moody and Stink series. She is also the author of three Sisters Club stories, two stories about Ant and Honey Bee, and many other books for children. She lives in Sebastopol, California.

Peter H. Reynolds is the illustrator of the Stink and Judy Moody series and the author-illustrator of many picture books, including The Dot, Ish, So Few of Me, and Sky Color. Born in Canada, he now lives in Dedham, Massachusetts.
Frequent illustrations by Peter H. Reynolds up the fun quotient, as do the occasional pages of Shakespearean quotes, insults, and coined words. Forsooth, methinks this chapter book is a winner!
—New York Journal of Books