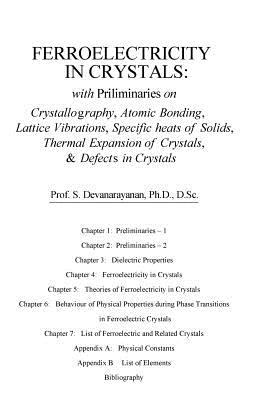 
Not On Our Shelves—Ships in 1-5 Days
(This book cannot be returned.)
Ferroelectricity in crystals with preliminaries on Crystallography Atomic Bonding Lattice Vibrations Specific heats of Solids Thermal Expansion of Crystals Defect in Crystals.
Prof. ( Dr.) S. DEVANARAYANAN, Ph.D. (IISc); D.Sc. (USA), Dip (Uppsala) Dr. S. Devanarayanan was educated at the University College, Thiruvananthapuram (1961 - 63), Indian Institute of Science, Bangalore (1963 - 70), and Institute of Physics, Uppsala, Sweden (1970 - 71). He had a brilliant academic career throughout. He was in the Faculty of the University of Kerala (1971 - 2000) and was the Professor & HOD of the Department of Physics, University of Kerala (1993 - 2000); and has 37 years of teaching / research experience in Physics and Materials Science.. He was Professor in the University of Puerto Rico (1989 - 91), Some 21 students have completed Ph.D. and M.Phil. under his supervision. He has to his credit over 80 published research papers in standard scientific periodicals. A monograph entitled THERMAL EXPANSION OF CRYSTALS (Pergamon, Oxford, 1979, also Kindle edition) and books "QUANTUM MECHANICS: Principles and Applications" (SciTech, 2005, 2010), QUANTUM CHEMISTRY (SciTech, 2013), PHYSICS IN A NUTSHELL (Amazon, 2016), A TEXT BOOK ON NUCLEAR PHYSICS (Amazon, 2016) and FERROELCTRICITY IN CRYSTALS (Amazon, 2016) were authored by him. He has served as a Professor in Physics at the University of Puerto Rico, USA, (1989 -91). He was awarded the SIDA Fellowship and worked at The Institute of Physics, Uppsala, Sweden (1970 - 71). A Life Member of various academic bodies like the IAPA Indian Physics Association, American Physical Society, American Chemical Society, and Founder Fellow of the Indian Cryogenic Council, his biography has found place a number of times in the publications of Marquis' Who's Who (USA) (2013)(2014), IBC (UK)(2011), ABC(USA) (2005), etc. The Govt. of Kerala appointed him as a member of the Commission of Enquiry on the working of the University of Kerala, in Oct 2000 - Mar 2001. He was in several Committees, Boards of Studies, Examinations and Selection Boards in different Universities, Faculty of Science, Academic Council of University of Kerala, Expert in State Level and National, UPSC competitive Tests. Prof. Devanarayanan has found honour in finding a name in the Star Chart, - Cat #TYC-7882-99-1- Scorpio Constellation- NASA- Feb 2013 -png. He had the special honour of being invited by the Royal Swedish Academy to submit proposals for the award of the Nobel Prize in Physics for 1995. He has made academic visits in 14 countries