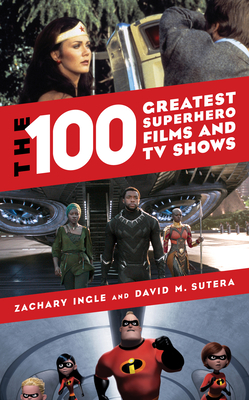 
Backordered
A fascinating exploration of the most significant superhero films and television shows in history, from the classic serial Adventures of Captain Marvel to the Disney+ hit show WandaVision. In The 100 Greatest Superhero Films and TV Shows, Zachary Ingle and David M. Sutera celebrate over eighty years of superhero cinema and television. Featuring blockbusters such as Black Panther and The Dark Knight, Ingle and Sutera also include lesser-known yet critically acclaimed shows like The Boys, cult films such as The Toxic Avenger, and foreign series like Astro Boy to provide a well-rounded perspective of the genre. All one hundred selections are evaluated based on qualities such as plot and character development, adherence to the original source materials, technological innovations, and social impact. The entries cover both live-action and animated films and TV series, and almost a third of the entries are not associated with Marvel or DC-a testament to the genre's variety in its eighty-year history. The 100 Greatest Superhero Films and TV Shows includes an analysis of the superhero's evolution and its relevance to the feminist movement, auteur theory, convergence culture, critical race theory, and more. Featuring more than 80 photographs alongside the authors' selections, the diverse entries are sure to inspire debate and entertain all fans of superhero movies and television shows.
Zachary Ingle is a visiting assistant professor of film at Hollins University. He has edited four books and has published articles in Post Script, Literature/Film Quarterly, and Journal of Sport History. He lives in Roanoke, Virginia. David M. Sutera is an assistant professor at Bridgewater State University. He is the author of Vaudeville on the Diamond: Minor League Baseball in Today's Entertainment World and Sports Fans 2.0: How Fans Are Using Social Media to Get Closer to the Game. He lives in Bridgewater, MA, outside of Boston.