Not Too Old for That: How Women Are Changing the Story of Aging (Hardcover) 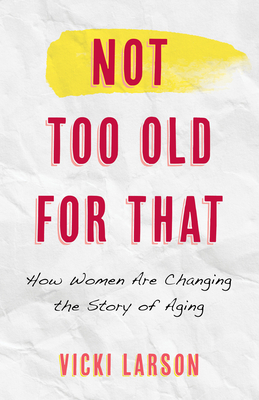 Not Too Old for That: How Women Are Changing the Story of Aging (Hardcover)


Not On Our Shelves—Ships in 1-5 Days
(This book cannot be returned.)
Helps women break through the tired and hurtful stereotypes of aging to better reflect who they are, how they live, and what they want as they age. Who hasn't heard the stereotypes about women of a certain age?" That's the age when women become invisible, irrelevant, undesirable, asexual, unhinged, dried-up, hormonal messes. It's when women quickly slide into fragility and become forgetful, passive, weak, feeble, debilitated, disabled, dependent, and depressed. Or so the story goes. Not only are those outdated narratives sexist and ageist, they are also damaging to women's physical, emotional, financial, romantic, and sexual health. It's time to change them. In Not Too Old for That, Vicki Larson helps change the narrative about being a woman at midlife and older. She questions what we've been told aging would be like and encourages us to instead ask ourselves, what do we want it to be like, and how can we get there? The key is to be curious, open-minded, and intentional about the ways we are becoming our future selves.We have an opportunity to create new narratives of aging as a woman, ones that value women at all stages of life, not just youth, and it starts with us. Once the stereotypes that have held women back are broken down, women can move past them and rather than feel helpless as the years add up, they can discover and tap into just how much agency they have. Not only will this book help to create a less-ageist, less-sexist, more-inclusive future, it will release our daughters and all young women from a similar future.
Vicki Larson is a longtime award-winning journalist, the lifestyles editor, columnist, and writer at a San Francisco Bay Area newspaper, and the coauthor of the groundbreaking book, The New I Do: Reshaping Marriage for Skeptics, Realists and Rebels, named a Best Book of 2014 by PopSugar. A resident of Marin County, California, her writing can be found in The New York Times, The Guardian, The Washington Post, Aeon, WHYY, and numerous other publications, including Quartz, HuffPost, and Medium.