Where Are We Now?: The Epidemic as Politics (Paperback) 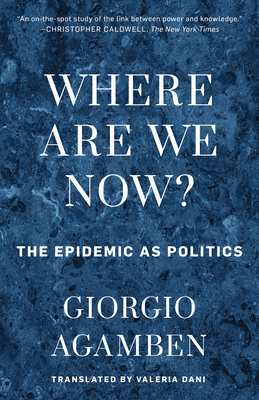 Where Are We Now?: The Epidemic as Politics (Paperback)


Not On Our Shelves—Ships in 1-5 Days
Renowned Italian philosopher Giorgio Agamben presents his fierce, passionate, and deeply personal commentaries regarding the 2020 health emergency as it played out in Italy and across the world. Alongside and beyond accusations, these texts reflect upon the great transformation affecting Western democracies. In the name of biosecurity and health, the model of bourgeois democracy-together with its rights, institutions, and constitutions-is surrendering everywhere to a new despotism where citizens accept unprecedented limitations to their freedoms. The push to accept this new normal leads to the urgency of the volume's title: Where Are We Now? For how long will we accept living in a constantly extended state of exception, the end of which remains impossible to see?
Giorgio Agamben is a contemporary Italian philosopher and political theorist whose original works have gained critical acclaim and have been translated into numerous languages. His most recent books are Creation and Anarchy: The Work of Art and the Religion of Capitalism and What Is Real? Agamben is a frequent contributor to numerous international newspapers and other media.