Best Pick: A Journey through Film History and the Academy Awards (Hardcover) 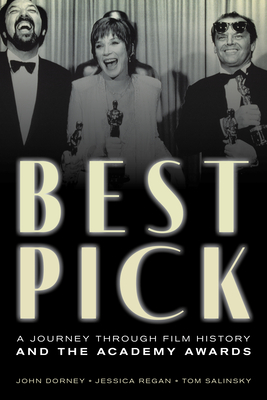 Best Pick: A Journey through Film History and the Academy Awards (Hardcover)


Not On Our Shelves—Ships in 1-5 Days
A fascinating history of motion pictures through the lens of the Academy Awards, the Best Picture winners, and the box-office contenders. In Best Pick: A Journey through Film History and the Academy Awards, John Dorney, Jessica Regan, and Tom Salinsky provide a captivating decade-by-decade exploration of the Oscars. For each decade, they examine the making of classic films, trends and innovations in cinema, behind-the-scenes scandals at the awards ceremony, and who won and why. Twenty films are reviewed in-depth, alongside ten detailed "making-of" accounts and capsule reviews of every single Best Picture winner in history. In addition, each Best Picture winner is carefully scrutinized to answer the ultimate question: "Did the Academy get it right?" Full of wonderful stories, cogent analysis, and fascinating insights, Best Pick is a witty and enthralling look at the people, politics, movies, and trends that have shaped our cinematic world.
John Dorney is an actor and a writer. He's acted at the National Theatre, had a script on at the Royal Court Theatre, and won the BBC's Sketch Factor and Show Me the Funny talent searches. He's written over a hundred audio dramas for Big Finish Productions, for which he's won two Scribe Awards, an Audie, and a BBC Audio Drama Award. Jessica Regan is an award-winning, RADA-trained Irish actor, writer, and podcaster based in London. She has performed on many UK stages, including the National Theatre and on the West End, as well as BAM in New York and the Wallis Annenberg in LA. Regan has appeared in multiple television shows, primarily for the BBC. She is a prolific audio artist, especially in gaming, and likes using her voice to help people find theirs. Tom Salinsky is a writer, podcaster, communications coach, and improviser. As a founding member of the London-based improvisation company The Spontaneity Shop, he co-wrote The Improv Handbook. As well as the Best Pick podcast, he is the producer of the award-winning podcast The Guilty Feminist. With Robert Khan, he is the author of five plays and several audio dramas for Big Finish. The authors live in London, England.