The Betrayal: How Mitch McConnell and the Senate Republicans Abandoned America (Hardcover) 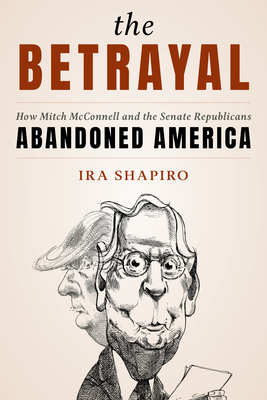 The Betrayal: How Mitch McConnell and the Senate Republicans Abandoned America (Hardcover)


In Stock—Click for Locations
In two previous highly regarded books on the U.S. Senate, Ira Shapiro chronicled the institution from its apogee in the 1970s through its decline in the decades since. Now, Shapiro turns his gaze to how the Senate responded to the challenges posed by the Trump administration and its prospects under President Biden. The Founding Fathers gave the US Senate many functions, but it had one fundamental responsibility--its raison d'etre: to provide the check against a dangerous president who threatened our democracy. Two hundred and thirty years later, when Donald Trump, a potential authoritarian, finally reached the White House, the Senate should have served as both America's first and last lines of defense. Instead, we had the nightmare scenario: today's Senate, reduced through a long period of decline to a hyper-partisan, gridlocked shadow of its former self, was unable to meet its fundamental responsibility. Shapiro documents the pivotal challenges facing the Senate during the Trump administration, arguing that the body's failure to provide leadership represents the most catastrophic failure of government in American history. The last section covers the Senate's performance during President Biden's first year in office and looks forward to the 2022 Senate elections and beyond.
Ira Shapiro's forty-five year Washington career has focused on American politics and international trade. Mr. Shapiro served twelve years in senior staff positions in the U.S. Senate, working for a series of distinguished senators: Jacob Javits, Gaylord Nelson, Abraham Ribicoff, Thomas Eagleton, Robert Byrd and Jay Rockefeller. He served in the Office of the U.S. Trade Representative during the Clinton administration, first as General Counsel and then chief negotiator with Japan and Canada, with the rank of ambassador. From 2012 to 2017, he was the chairman of the National Association of Japan-America Societies (NAJAS) and received a Commendation from the Foreign Minister of Japan. He is the author of two previous critically-acclaimed books about the Senate: The Last Great Senate: Courage and Statesmanship in Times of Crisis (2012) and Broken: Can the Senate Save Itself and the Country? (2018). His articles have appeared in The New York Times, U.S. Today, cnn.com, The Hill, Bloomberg, The Daily Caller, Newsmax, and several local newspapers around the country. Ira currently resides in Bethesda, Maryland.