The Battle of Pickett's Mill: Along the Dead Line (Hardcover) 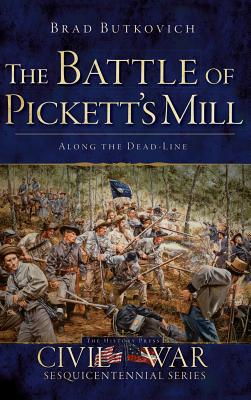 The Battle of Pickett's Mill: Along the Dead Line (Hardcover)


Not On Our Shelves—Ships in 1-5 Days
(This book cannot be returned.)
On May 27, 1864, Union forces under the command of William Tecumseh Sherman attacked Confederate general Joseph E. Johnston and his men at Pickett's Mill in Paulding County, Georgia. Following his defeat at New Hope Church, Sherman ordered Major General Oliver Howard to attack Johnston's flank, which Sherman believed to be exposed. But the Confederate soldiers were ready, and Sherman's supporting troops never arrived. What ensued was a battle that cost 2,100 lives and a defeat that Sherman left completely out of his memoirs. Author Brad Butkovich brings to life through personal letters, newspaper accounts and unit histories the battle that Union soldier and author Ambrose Bierce called "the Dead-Line.