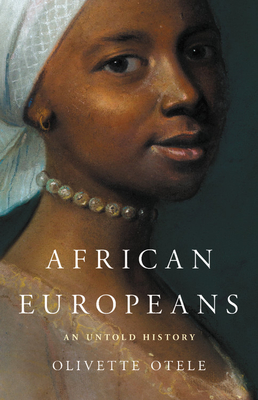 
In Stock—Click for Locations
A dazzling history of Africans in Europe, revealing their unacknowledged role in shaping the continent

One of the Best History Books of 2021 — Smithsonian

Conventional wisdom holds that Africans are only a recent presence in Europe. But in African Europeans, renowned historian Olivette Otele debunks this and uncovers a long history of Europeans of African descent. From the third century, when the Egyptian Saint Maurice became the leader of a Roman legion, all the way up to the present, Otele explores encounters between those defined as "Africans" and those called "Europeans." She gives equal attention to the most prominent figures—like Alessandro de Medici, the first duke of Florence thought to have been born to a free African woman in a Roman village—and the untold stories—like the lives of dual-heritage families in Europe's coastal trading towns. African Europeans is a landmark celebration of this integral, vibrantly complex slice of European history, and will redefine the field for years to come.
Olivette Otele is distinguished research professor at SOAS University of London and former vice president of the Royal Historical Society. She is the first Black woman to be appointed to a professorial chair in history in the UK, and her writing has appeared in the Guardian, the BBC’s History Extra, and Times Higher Education.
“Ms. Otele, a black scholar at Britain’s University of Bristol, takes a broad view of her subject. Sometimes, the African Europeans of the title are, as one might expect, people living in Europe, but on many other occasions, they are blacks or people of mixed-race who have lived elsewhere, in other far-flung quarters of the Atlantic world. Her book is equally sprawling in terms of time, moving back and forth across the centuries, from antiquity to the present… Some of Ms. Otele’s most interesting material is future-looking, asking questions about the ambivalence experienced by blacks in contemporary Europe.”—Wall Street Journal

"This brisk, nuanced synthesis reminds us that there have been Africans in Europe for millenia."—Stephen Carter, Bloomberg Opinion, The 15 Best Nonfiction Books of 2021

“Magisterial....A story of violence and exclusion but also extraordinary destinies and achievements. Particularly admirable is Otele’s command of the subtleties of identity formation and change over time, as well as her marvellous cast of women characters, such as Jeanne Duval, Baudelaire’s muse and lover.”—Sudhir Hazareesingh, The Guardian, The Best Books of 2020

“A fascinating history, with a memorable cast of characters, of Africans who had a vital presence in European life….Though this is a work of synthesis, it’s an unusually generous and densely layered one. Otele is not just concerned to tell the life stories of her protagonists, but also to follow their changing portrayals after death – as well as explaining how and why they’ve been differently interpreted by generations of previous scholars.”—The Guardian (UK)

“In a sweeping history extending from the classical world to the twentieth century, Otele masterfully analyzes the changing relationship between Africa and Europe through the lives of individual Africans who in some manner dealt with Europeans....Otele argues convincingly that the hardening of racist European views about Africans was the inevitable result of the Atlantic slave trade and the subsequent colonial occupation of the continent. But even in this more recent hate-filled period, Otele finds examples of Africans or people of African descent who achieved prominence in Europe against the odds.”—Foreign Affairs

“Her cast of characters is as broad as her canvas, and by redrawing the centuries-long story of African immigration, her book changes how European history is understood.”—Christian Science Monitor

"Superbly researched....This richly layered history brims with stories of how African Europeans contributed to the culture, politics and language in the countries they lived in."—Prospect (UK)

“Intricately researched by renowned historian Olivette Otele, this is a much-needed addition to existing narratives of European history. It corrects the myth that the presence of Africans in Europe is recent and shines a light on their true and lasting contributions to the continent.”—Ms. Magazine

“In this sweeping chronicle, scholar Olivette Otele challenges white-centric narratives of European history by tracing African people’s presence on the continent from the 3rd century to the 21st. African Europeans artfully examines changing conceptions of race and how these ideas have shaped both real-world experiences and accounts of the past.”—Smithsonian, The Ten Best History Books of 2021

“A brilliant telling of a story that’s been too long overlooked.”—The New European (UK)

“[Otele offers] insights into BIPOC in Anglo-American history and explores how marginalized people built communities despite obstacles and anti-Blackness… In African Europeans, Otele shows the collapse of borders to give us a better image of movement and people in a Europe that is not quite as white as has been ingrained in western thinking.”—Public Books

"A brilliant, important and beautifully written book that forces us to think about the past differently."—History Today

“Renowned historian Olivette Otele exposes the real truths behind the presence of Africans in Europe, disproving the theory that Africans only recently resided on the continent. She uncovers the long history of Europeans of African descent dating all the way back to the third century.”—The Root

“Fascinating…explore[s] the complex and intertwined histories of people of African and European descent from the third century to the present day.”—African Business (UK)

“The breadth and depth of Otele’s research are impressive, as are the vivid characters who populate these pages….The author analyzes the many manifestations of racism they have faced and how that prejudice and oppression can have generational effects….Otele is also highly attuned to the role of gender in her history, and she consistently draws attention to the ways in which African women have been treated in European countries. By detailing such a wide variety of experiences across a vast geographical and cultural landscape, the author causes us to rethink the way we consider the terms ‘African’ and ‘European.’…A thorough, dynamic, accessible narrative that pulls together disparate strands into a unique, fresh history.”—Kirkus

“Otele…delivers a concise scholarly history of the presence of people of African descent in Europe….Otele’s profiles reveal the richness and variety of the African European experience. This is a welcome introduction to an under-explored subject.”—Publishers Weekly

“Sweeping new history… Particularly powerful is the way Otele leaps between the centuries to lay bare the “connections across time and space” that have shaped, and will continue to shape, the identities and lives of African Europeans.”—Library Journal

"Rich in storytelling, discovery, question-making and a way forward, African Europeans covers no old ground. This is new—and European history itself is not complete without this book."—Bonnie Greer, playwright, novelist and broadcaster

"This is a book I have been waiting for my whole life. It goes beyond the numerous individual black people in Europe over millennia, to show us the history of the very ideas of blackness, community and identity on the continent that has forgotten its own past. A necessary and exciting read."—Afua Hirsch, author of Brit(ish)

"Yoking together the “African” and the “European,” too often treated as entirely separate categories, Otele skillfully invites her reader to navigate the multiple intersecting worlds inhabited by her characters. This is fundamentally reparative writing that undoes the cultivated ignorance around race and blackness in Europe and shows us what is irrefutably true—that black history is European history, indeed, world history."—Priyamvada Gopal, author of Insurgent Empire

"A magisterial book—brilliant, humane and gripping, and a call to arms for an end to violence and subjugation. Otele explores the individual lives of African Europeans against great shifts of history, and the result is a masterpiece."—Kate Williams, historian and broadcaster

"This is a book that all must read—now. This story has been lived not just for centuries but for millennia, all the while being consistently suppressed, denied or untold. Searing scholarship and heightened humanity combine to illuminate, appall, explore and ultimately inspire."—Bettany Hughes, historian and broadcaster

"The scope of Otele’s research is awesome, as is her unflinching analysis of the shifting prisms through which African Europeans—particularly women—have had to contest their identities. Full of powerful stories with deep roots and livid scars, African Europeans is scholarly, revelatory and important."—Jessie Childs, author of God’s Traitors and Henry VIII’s Last Victim

"Fascinating. Otele reconnects us with the men and women who came from Africa to shape European history: rulers, diplomats, slaves and soldiers—above all, our ancestors."—Dan Snow, historian and broadcaster

"The first survey this century of the fascinating 2,000-year-long history of Africans in Europe. Otele’s masterful narrative weaves together the lives of prominent figures—St Maurice, Jacobus Capitein, Manga Bell, Paulette and Jane Nardal—with those of everyday people."—Hakim Adi, author of Pan-Africanism: A History

"Olivette Otele is a scholar with a vivid intellect and a deep sense of right and wrong. African Europeans forces us to reassess the past so that we can imagine a different future."—Fiammetta Rocco, chief culture writer, The Economist

"A nuanced, thoughtful retelling of the stories of African Europeans, with extraordinary scope. Otele triumphs in her commitment to countering the experiences of the privileged with those of the enslaved. This is a learned, impassioned and searingly important history."—Suzannah Lipscomb, historian and broadcaster

"Important, exciting and illuminating. Otele takes us through centuries of history we think we know, but shifts the lens onto those who have been deliberately excluded from traditional historical narratives. This book will change how you look at the past and introduce you to wonderful characters with rich and revealing lives."—Janina Ramirez, historian and broadcaster