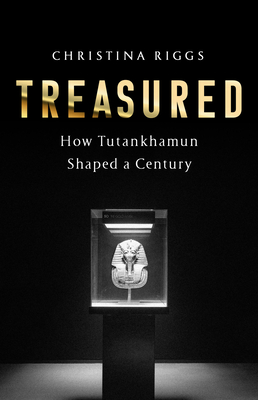 
In Stock—Click for Locations
A bold new history of the discovery of King Tut and the seismic impact it left on modern society.

When it was discovered in 1922, in an Egypt newly independent of the British Empire, the 3,300-year-old tomb of Tutankhamun sent shockwaves around the world. The boy-king became a household name overnight and kickstarted an international obsession that continues to this day. From pop culture and politics to tourism and the heritage industry, it’s impossible to imagine the past century without the discovery of Tutankhamun – yet so much of the story remains untold.

In Treasured, Christina Riggs weaves compelling historical analysis with tales of lives touched, or changed forever, by an encounter with the boy-king. Who remembers that Jacqueline Kennedy first welcomed the young pharaoh to America? That a Tutankhamun revival in the 1960s helped save the ancient temples of Egyptian Nubia? Or that the British Museum’s landmark Tutankhamun exhibition in 1972 remains its most successful ever? But not everything about ‘King Tut’ glitters: tours of his treasures in the 1970s were linked to Big Oil, his mummified remains have been exploited in the name of science, and accounts of his tomb’s discovery exclude Egyptian archaeologists.

Treasured offers a bold new history of the young pharaoh who has as much to tell us about our world as his own.

Christina Riggs  is an expert on the history of the Tutankhamun excavation and the author of several books, including Photographing Tutankhamun and Ancient Egyptian Magic: A Hands-on Guide. Born in Ohio, she studied at Brown University before moving to England where she received her doctorate at Oxford University. She is Professor of the History of Visual Culture at Durham University.
“This is no dry tome, but a tale of personal obsessions -- her own, and that of many others, who were affected by this most sensational discovery.”—Paul Strathern, author of Empire: A History of the New World

“Searching, masterful and eloquent, Treasured plunges the reader into the mesmerizing story of Tutankhamun and the unending struggle for meaning, identity and money his rediscovery ignited a century ago. A deeply personal account that reveals how the scientific claims of Egyptology remain unable to match the mythological power of Tutmania, and how gazing on the boy king's golden face has shaped our perceptions of Egypt - and ourselves.”—James Delbourgo, author of Collecting the World

“At last, a serious treatment of one of the twentieth century's most important cultural icons. Impeccably researched and beautifully written, Treasured is infinitely more accurate and fascinating than what's gone before."—David Wengrow, co-author of The Dawn of Everything

“Christina Riggs brings a host of fresh perspectives to the story of Tutankhamun - a story you might feel you know, but really don't. A fabulous cultural history of the boy-king's discovery and the complex afterlife of that global event, weaving together colonial and Egyptian elements with the strange international role the pharaoh's body and treasures have taken on in the last 100 years. Elegant, compelling and illuminating.”—Professor Roger Luckhurst, author of The Mummy's Curse

“An imaginative weaving of the personal and political into a fresh narrative of an archaeological icon.”—Kirkus

"In 'Treasured: How Tutankhamun Shaped a Century' (Public Affairs), the historian Christina Riggs writes about the pharaoh’s ongoing role in geopolitics. She focusses in particular on a series of global tours that took Tutankhamun’s treasures around the world… Among the millions of people who came to know Tutankhamun through these travelling exhibitions was Riggs herself."—New Yorker