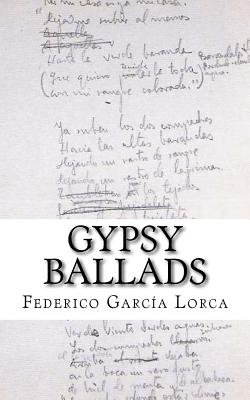 
Not On Our Shelves—Ships in 1-5 Days
(This book cannot be returned.)
Prepare to be mesmerized by the genius of Federico Garc a Lorca as he paints for us with poetry an almost surreal tableau of humanity and inhumanity. Lorca described his poetic study of human nature as an intricate 'retablo' of southern Spain. On the surface it depicts the daily struggles of a marginalized people, but beneath the surface there is so much more. In these eighteen poems Lorca illustrates for us with words and lyrical incantations the daily interactions of the oppressors and the oppressed. Here we have on display the seven deadly sins (and three last things ) that Hieronymus Bosch explored hundreds of years earlier with oil paint. You will witness the lust (Luxuria) of The Cheatin' Wife and her gypsy lover; and the dark sorrow (Tristitia) of the loveless Soledad Montoya, the abandoned girl of the Dreamwalking Ballad, and the conflicted Gypsy Nun. You will be assaulted by the greed (Avaritia) of the Sons of Benamej as they murder a flamboyant gypsy for his shoes and jewelry, and the wrath (Ira) of knife-wielding rival gangs as they skirmish and kill each other for nothing but pride (Superbia). Lorca then saves his best for the Spanish Civil Guard, symbol of ignorance, brute power, and police oppression as he rails against their sloth (Acedia), gluttony (Gula), and vanity (Vanagloria) while they terrorize the peasants of the Andalusian countryside with their guns and raze whole villages in their fury. Lorca knew what might come--he was a marked man--but he did not flinch or pull his punches. Saints and sinners swirl 'round and 'round and 'round midst wind and water under an omnipresent Gypsy Moon in these songs of seduction and sobriety. What does it all mean? The poet doesn't say, but rather leaves it to us to ponder and find application in our own lives.
Jeff's early university studies were in the literature and linguistics of Romance languages and these fields have continued to fascinate him for many years. His recent work in linguistics has been in the field of Q'eqchi' Mayan lexicography and applied linguistics. He compiled the first modern Q'eqchi' English bilingual dictionaries, filling a gap that existed for many decades after the first systematic study of this important Mayan language in Guatemala and Belize.