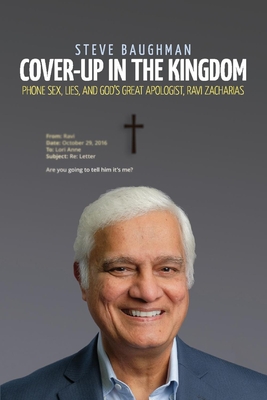 
Not On Our Shelves—Ships in 1-5 Days
The great evangelist, Ravi Zacharias, had been a pretender for decades. The influential apostle to the Academy had built a self-named empire by claiming for himself academic credentials that he did not have. He told fans and donors that he was "a professor at Oxford" and a "visiting scholar at Cambridge." He told them that he had been "educated in Cambridge," where he had studied quantum physics under the renowned John Polkinghorne. He told them he had chaired a department that never existed. And more. His claims were false, and his Christian business colleagues knew it. They remained silent. Ravi Zacharias was too useful to the Kingdom. He had written dozens of books, had a weekly radio show that reached over 2000 outlets, he packed large auditoriums around the world, and in 2016 his ministry brought in $42,000,000. This was a large boat that nobody in the Chriatian business world wanted to rock. But then Zacharias had an online affair with a married woman. On October 29, 2016, she informed him that she would confess the affair to her husband. The evangelist responded by threatening suicide. And he did so in writing. Word of the famous preacher's suicide threat began to leak out. Zacharias's cover was about to blow. And when it did it would expose not just another corrupt clergyman but also cynicism and unbelief at the highest levels of God, Inc.Zacharias was desperate. On July 31, 2017, he filed a federal lawsuit against the woman. Four months later the parties settled on terms that required silence. The evangelist, it seemed, had resecured his cover. This book blows that cover. Through meticulous documentation the author takes the reader through Ravi's journey from being a suicidal youth in India to his attaining world prominence as an evangelist to the thinking person. The author shares Zacharias's suicide emails and the confidential legal letter the preacher received that outlined his misconduct with the married woman. The reader also will see the evangelist's false credential claims carefully dissected with documentation from Oxford and Cambridge and other sources. After nearly four decades of successful deception Ravi Zacharias is finally revealed as the tattered pretender he is. As for his enablers in the God business, this book will force them to reflect on their supposed belief in the deity who so clearly forbids lying.
Steve Baughman practices law in the San Francisco Bay Area. He has a Masters Degree from UC Berkeley and is a part-time philosophy student at the Graduate Theological Union in Berkeley. His latest book is Gospel Songs for Fingerstyle Guitar (Stringletter Media 2018).