What Clergy Need To Know About: Mental Illness (Paperback) 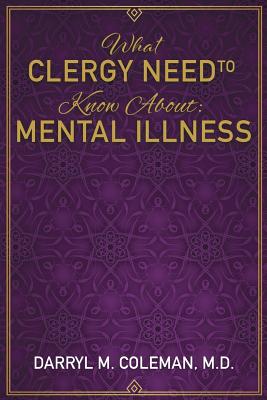 What Clergy Need To Know About: Mental Illness (Paperback)


Not On Our Shelves—Ships in 1-5 Days
Dr. Darryl Coleman received his Bachelor of Science degree in Biology from Rensselaer Polytechnic Institute in 1983 and graduated from University of Maryland School of Medicine in 1989. Dr. Coleman completed his Psychiatry Residency at the University of Maryland Residency Program. His Administrative Fellowship was completed in 1994 and he began treating individuals in his private practice in Catonsville and Baltimore, Maryland. The practice serves children, adolescents and adults with depression, anxiety, psychosis, bipolar disorder and a host of other mental illnesses. He also treats individuals who have dual illnesses including mental illness and drug use. Dr Coleman enjoys serving his clients. Dr Coleman is an advocate for this population and furthers their causes whenever he can. Over the years Dr. Coleman has made contributions to medical publications, been involved in psychiatric research, has appeared on health-related television shows and talk radio programs. He has presented numerous lectures throughout the nation and has facilitated trainings in Mental Health and Correctional Medicine. Dr Coleman was the Statewide Medical Director for Maryland's correctional system for 3.5 yrs and worked in correctional medicine for a total of 7 yrs. For over 5 years he played an integral part in the Rookie Success Program for the Baltimore Ravens providing valuable training for new recruits. Throughout his medical career he has been interested in treating the whole person; Body, Mind, and Spirit He ﬁrmly believes in the integration of medicine and spirituality. In 1996 Dr Coleman founded the Nam loc Whole Life Center where he is currently the President and CEO. The Mission Statement of the center is "to empower each person to access that inner healer through diagnosis, treatment, research, and education by uniting a community of healers who are aligned with a vision which respects and appreciates the communion of Body, Mind and Spirit, producing Wholeness. Dr Coleman enjoys playing Grand Master's Lacrosse in Howard County where he has been playing for 3 years, exercising and spending time with his family. He has 2 wonderful daughters and two grandchildren. He attends the Spirit of Faith Christian Center in Baltimore, Maryland where he has fellowshipped for approximately 8 years.