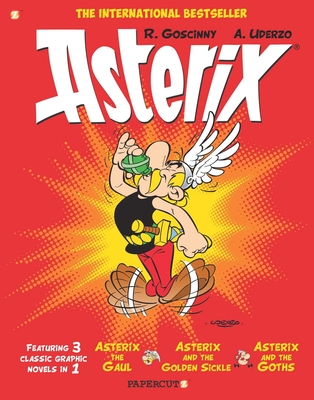 This is book number 1 in the Asterix series.

Asterix is celebrating 60 sensational years as an international comics superstar, and in the first collected edition from Papercutz, the stories are newly translated into American English for a new generation of fans! The story of Asterix starts here. These are the first three adventures of Asterix as he defends his tiny village from the overwhelming forces of the Roman Empire. Join the short, spunky, and super-powerful warrior from Gaul and his faithful friends--including the boar-eating delivery man Obelix and the ecologically-minded canine, Dogmatix--as they battle to protect their village against impossible odds. Asterix Omnibus volume one collects “Asterix the Gaul,” “Asterix and the Golden Sickle,” and “Asterix and the Goths.” Three classic adventures in one great volume.

Rene Goscinny was born in Paris in 1926. After growing up in Argentina, he came to America where he shared a studio with future Mad magazine co-founder Harvey Kurtzman and collaborators Will Elder and Jack Davis, an association that would mark him for life. In 1959, he founded the magazine Pilote which premiered what was to become the most successful comic series anywhere: Asterix. He died suddenly and way too early of cardiac arrest in 1977 at the age of 51.

Albert Uderzo was born in France 1927 to Italian Immigrants. In 1959 Goscinny and Uderzo became editor and artistic director (respectively) of Pilote magazine. Their creation, Asterix became a runaway success. After Goscinny's death in 1977, 26 volumes of Asterix were complete, Uderzo continued to write and illustrate the Asterix books on his own, publishing 8 volumes. The cover credits still read "Goscinny and Uderzo.” He retired from drawing in 2011 but still oversees Asterix and the current publications by Jean-Yves Ferri and Didier Conrad.

“Totally silly and weird…really great for kids… if you read them as a kid, I think you will really enjoy revisiting them”
-Slate “Mom and Dad Are Fighting” Podcast
"When I was 6 or 7, around 1972, my father used to fill up in his car at a nearby petrol station. If you had enough fuel many times you got points to redeem for a special Asterix album. After reading the first book we got, I pestered my father for him to go and refuel ONLY at this location. There were four to collect: Astérix The Gaul, Asterix and the Big Fight, Asterix the Gladiator and Asterix the Legionary. It was my introduction to the world of Asterix and I never stopped to buy the albums from then on … It was also the beginning of my addiction to the incredible world of comics."
– Charles Adlard (Artist of The Walking Dead)
I was ten years old on my first trip to Europe, where I discovered Asterix. The comics, with their incredible and vivid colors, stood out on the display. I loved the clever little warrior and his faithful companions, Obelix and Dogmatix. There were so many adventures, and I loved it!
– Terry Moore (Creator of Rachel Rising, Strangers In Paradies, and Motor Girl)
"That’s the real reason for its continuing appeal across decades and national boundaries: It’s a masterpiece of cross-cultural borrowing and reinvention"
- NPR