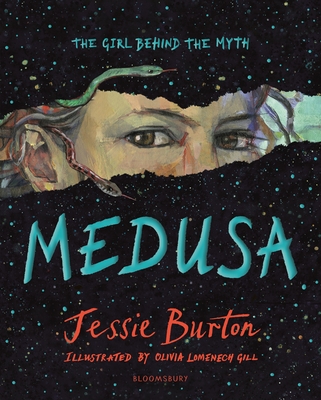 “A lyrical retelling of Medusa’s story — from a girl unfairly punished by the Gods and Goddesses to a woman who knows her true self. Full of love and longing, hope and betrayal, strength and power, this dazzling book should not be missed!”
— Katrina Bright-Yerges, Books & Company, Oconomowoc, WI

A dazzling, lyrical YA retelling of Greek myth, from Jessie Burton, internationally bestselling author of The Miniaturist and The Muse.

"A powerfully feminist, elegiac, and original twist on this old story." -Madeline Miller, bestselling author of The Song of Achilles

If I told you that I'd killed a man with a glance, would you wait to hear the rest? The why, the how, what happened next?

Exiled to a far-flung island by the whims of the gods, Medusa has little company except the snakes that adorn her head instead of hair. But when a charmed, beautiful boy called Perseus arrives on the island, her lonely existence is disrupted with the force of a supernova, unleashing desire, love, betrayal . . . and destiny itself.
With stunning, full-color illustrations and a first person narrative illuminating the fierce, vulnerable, determined girl behind the myth, this astonishing retelling is perfect for readers of Circe, and brings the story of Medusa to life for a new generation.

Jessie Burton is the author of three novels for adults, The Miniaturist and The Muse-both New York Times bestsellers-and The Confession, which became an immediate Sunday Times bestseller. Jessie's first novel for children, The Restless Girls, was published by Bloomsbury in 2018.
www.jessieburton.co.uk
@jessieburton (Instagram)

Olivia Lomenech Gill is the illustrator of Where My Wellies Take Me, written by Michael and Clare Morpurgo, was shortlisted for the Kate Greenaway Medal and won the English Association Picture Book Award. She is also the illustrator of Fantastic Beasts and Where to Find Them by J. K. Rowling.
www.oliviagill.com
@olivia_lomenech_gill (Instagram)

“A beautiful and profound retelling. Burton's text and Lomenech Gill's art are a perfect match, offering a powerfully feminist, elegiac, and original twist on this old story. The book tackles pain and trauma without flinching, but its message is ultimately one of joy and hope.” —Madeline Miller, author of THE SONG OF ACHILLES

“Medusa is absolutely stunning and easily my read of the year – sheer perfection from start to finish, both in words and art.” —Catherine Doyle, author of THE STORM KEEPER series

“This book is a beautiful excavation, uncovering the girl beneath the gorgon, the power within the punished. Exquisitely told, Medusa stole my heart from its first fierce lines.” —Mary Watson, author of THE WREN HUT

"A fiercely feminist undercurrent fuels Medusa's unflinching voice. . . . An 18-year-old Medusa wrests control of her own story in this necessary reimagining of the Greek myth for YA readers." - Shelf Awareness, starred review

"Burton tackles an old myth with unflinching honesty to reclaim Medusa’s story as one of self-love and bravery. . . . With unforgettable imagery and a powerhouse woman at the helm of the tale, this revamped myth is one to get on your bookshelf." - School Library Journal, starred

“In this haunting reimagining of the myth of Medusa and Perseus . . . Burton's take on the traditional adversaries humanizes both characters, blurring boundaries between hero and monster. Lomenech Gill's (Fantastic Beasts and Where to Find Them) angular, full-color illustrations add another layer of depth to the story.” —Publishers Weekly, starred review

"Throughout the book, Burton’s prose and Gill’s art work in harmony to offer two intertwined ways of learning who Medusa really is. By placing her at the center of the tale, they give an epic voice to victims whose stories often go ignored and untold. Readers who love nuanced retellings of myths will not want to miss it." - BookPage

“The Medusa myth is given new shading and depth in a feminist retelling that homes in on the heart of a young girl punished unfairly for being herself. Burton's prose [is] aquatic and mythical but not overwrought, its beauty is reflected in Gill's sublime full-page illustrations. A smart reimagining of an ancient tale that questions old tropes.” —Kirkus Reviews

“The dappled colors and sketchy lines of Gill’s illustrations anchor the story with brilliant images of coiled snakes, wheeling birds, and undulating waves, with a creamy, yellowing background reminiscent of an ancient text. . . . Hand this to teens looking for new layers of complexity in familiar figures.” —BCCB

“[A] wild, wise, generous, ferocious kind of story. It's a tale to read to your children over and over, and for them to read to theirs.” —Katherine Rundell, author of THE WOLF WILDER and THE EXPLORER, on THE RESTLESS GIRLS

“[A] story of female empowerment, agency and sisterhood. . . . 'The Restless Girls' is one of the prettiest books I've seen in a long time.” —The New York Times Book Review on THE RESTLESS GIRLS

“A richly imagined feminist fairy tale, laden with allusions to contemporary concerns about autonomy, gender roles, and power dynamics, that is extended in Barrett's lush scenes of the clever sisters and their revels.” —Publishers Weekly on THE RESTLESS GIRLS