The Congo Free State: The History and Legacy of the Colony Established by King Leopold II of Belgium (Paperback) 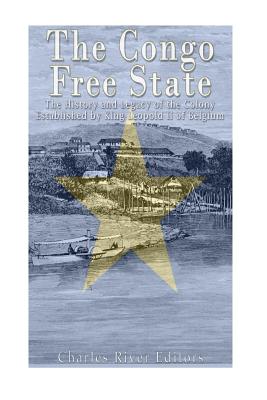 The Congo Free State: The History and Legacy of the Colony Established by King Leopold II of Belgium (Paperback)


Not On Our Shelves—Ships in 1-5 Days
(This book cannot be returned.)
*Includes pictures
*Includes contemporary accounts of the Congo Free State
*Includes online resources and a bibliography for further reading
"I do not want to risk...losing a fine chance to secure for ourselves a slice of this magnificent African cake." - King Leopold II of Belgium
King Leopold II of Belgium emerges from the pages of history as a curious character. He was a member of a privileged clique of European monarchs, bereft of power but rich, indulgent, and indolent. Leopold certainly availed himself of all the pleasures of court life, but he was also shrewd, astonishingly competent, and avaricious to an almost unimaginable degree. His initial interest in foreign real estate was imperial, insofar as he desired on behalf of Belgium the main accoutrements of a first-rate power, which were, of course, foreign estates and colonies. He was, however, unable to move the Belgian parliament to act in accordance, the conservative belief perhaps being that Belgium could not afford to compete on that level. Belgium was a small European nation, existing between major and, at times, belligerent powers, and as such, it quietly went about its business with a determination not to rock the European boat.
Displaying enormous ability and a masterful grasp of diplomatic maneuver, Leopold was able to secure primary rights over the territory of the Congo River catchment, a portion of the globe more than three times the size of France. By any standards, this was a monumental coup, and by the time the other European powers woke up to precisely what was underway, it was too late the arrest the momentum.
Of all the issues on the agenda as delegates gathered in Berlin in 1884, foremost was the Congo question. The matter was debated, and although deeply troubled by the potential consequences, recognition was eventually afforded to Leopold's claim to the Congo. And so, the Congo Free State came into being, a private fiefdom of Leopold II of Belgium and arguably one of the most cynical and exploitative colonial regimes across the European spectrum. The truth of this would not immediately come to light, and the high-minded proclamations that accompanied the formation of Leopold's colony were taken at face value. However, it was of profound importance was to ensure that nothing like it could happen again, and central to the agenda of the conference, which lasted almost a year, was to establish certain ground rules governing the future European partition of Africa.
Of these, three are most noteworthy. The first was that the annexation of any territory in Africa by any European power would not be formally recognized without a clear display of effective occupation and administration. Second, no such annexation could proceed without a formal request for protection on the part of an indigenous leader or monarch responsible for that territory. Such a plea for protection would be required to be submitted to treaty and be ascribed with the seal, mark, or signature of that king. The third rule, which could perhaps be better described as a convention, required that in the event of a European war, the territories, protectorates, and colonies acquired under the terms of the conference's General Act would remain neutral.
The Congo Free State: The History and Legacy of the Colony Established by King Leopold II of Belgium chronicles the turbulent history of the Belgian colony. Along with pictures depicting important people, places, and events, you will learn about the Congo Free State like never before.