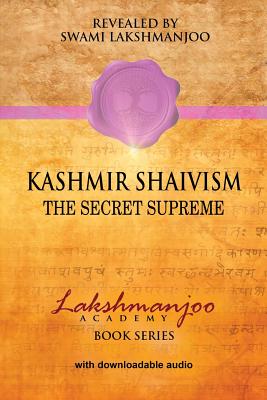 
Not On Our Shelves—Ships in 1-5 Days
(This book cannot be returned.)
Kashmir Shaivism: The Secret Supreme- Includes free downloadable audio of the original lectures. In 1971 John and Denise Hughes traveled to Kashmir, India to study Kashmir Shaivism under the world renowned Philosopher/Saint Swami Lakshmanjoo. This book is the result of the lectures he gave John and Denise when they asked him to teach them Kashmir Shaivism. - This is a definitive scholarly work on the philosophy and practice of Kashmir Shaivism by the self-realized master Swami Lakshmanjoo.This book, Kashmir Shaivism: the Secret Supreme, by the twentieth century's great philosopher saint Swami Lakshmanjoo, presents a systematic unfolding of the Tantric teachings of the ancient tradition known as Kashmir Shaivism. This profound tradition, long enshrouded in secrecy, is so rich and detailed in its descriptions of what it reveals as the ascent of individual consciousness to universal God Consciousness that it has been characterized as a 'mystical geography of awareness'. Within the pages of this book is found the key of the oral tradition which unlocks its secrets and provides the reader with the tools necessary to venture into this wondrous landscape.
Swami Lakshmanjoo was the last in an unbroken line of Kashmir Shaiva masters. As a boy his life was filled with a spiritual thirst to know and realize God. From a very early age he was filled with spiritual experiences. In fact these experiences were so intense that his parents thought he was suffering from hysteria. They were very concerned and approached their family guru, Swamiji's grand master Swami Ram, requesting him to help their son with his hysteria. Swami Ram laughed and said to them, "Don't worry, I should have such a disorder." As Swamiji grew older his desire to completely realize and apprehend the world of spirituality became paramount. To make this a reality he sat at the feet of his guru Swami Mahatabakak and took up the study and practice of Kashmir Shaivism. He became completely engrossed and enthralled in his spirituality, wholeheartedly practicing day and night, ultimately experiencing the fullness of Kashmir Shaiva realization. It is to his beloved Kashmir Shaivism that he devoted the whole of his life, teaching it to those who asked and translating and commenting on what he considered to be the most important texts of this system. He became renowned as a philosopher saint steeped in the tradition of Kashmir Shaivism. With the growing interest in Kashmir Shaivism over the last thirty years, hardly any publication has appeared without a mention of Swami Lakshmanjoo's contribution to this unique philosophy.