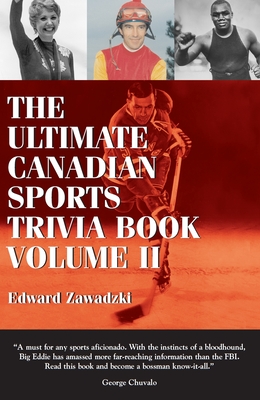 Q. Who's got the answer to the greatest brainteasers in Canadian sports?

Back for a second edition of the smash hit The Ultimate Canadian Sports Trivia Book, Ed Zawadzki has come up with more fascinating facts and long-forgotten legends.

- Who was the first Canadian professional wrestling champion?

- What was the largest suspension in NHL history?

- What Canadian was the first pitcher to throw both left-handed and right handed in a major league game?

Edward Zawadski's sporting endeavours have seen him in many roles, from university football player to columnist to boxing promoter and kickboxing commentator. He currently lives in Toronto. The Ultimate Canadian Sports Trivia Book, Volume II is Zawadzki's second book.

A fun read that's ideal for the trivia nuts, but also goes beyond the usual asked-and-answered questions, providing substantial background to each answer.