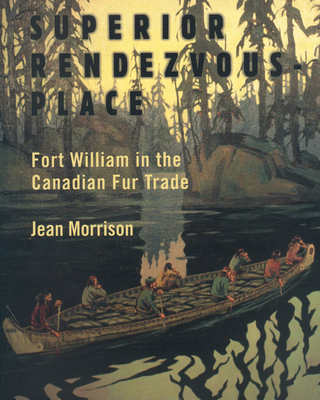 Jean Morrison has written a fascinating and important book, full of drama and colourful historical figures. Rare paintings, drawings, maps and archival photographs complement her impeccable research and lively text. Superior Rendezvous-Place encompasses the French predecessors of Fort William, Native Peoples of the time and the evolution of the fur trade, with an emphasis on the North West Company era.

This most important work concludes with details of the reconstruction of the fort and the development of Old Fort William, one of Ontario's must see attractions.

Jean Morrison is a natural story teller, and hers is an essential historical document in the compelling history of Fort William, once the centre of the North American commercial universe.

- Peter C. Newman, author of Caesars of the Wilderness

This book is wonderful reading. Jean Morrison's prose is beautiful.

Jean Morrison, historian at Old Fort William in Thunder Bay for 15 years, has written widely on Fort William and the North West Company. Her credits include North West Company in Rebellion: Simon McGillivray's Fort William Notebook, 1815 (Thunder Bay Historical Museum Society, 1988, reprint 1997) and numerous articles and reviews on the fur trade and local labour history in The Canadian Encyclopedia, the Dictionary of Canadian Biography, the Thunder Bay Historical Society's annual Papers and Records, The Beaver and Families (Ontario Genealogical Society). Since retirement in 1990, she has served on the Ontario Geographic Names Board and the Old Fort William Advisory Committee. Morrison loves living in Thunder Bay where she enjoys its multicultural society, its symphony orchestra, theatre companies, art galleries, historical museum and many other cultural opportunities. Besides her church and political activities, she takes time to savour Lake Superior's grandeur and Northwestern Ontario's wilderness. Married to Ken Morrison, she is proud of her three grown daughters, one granddaughter and three grandsons.