Fortune's A River: The Collision of Empires in Northwest America (Paperback) 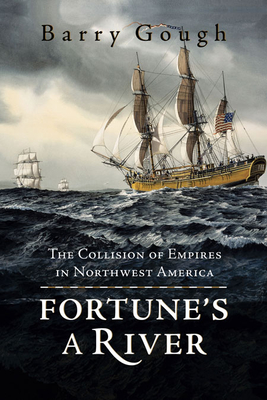 Fortune's A River: The Collision of Empires in Northwest America (Paperback)

Finalist for the Roderick Haig-Brown Regional Prize, BC Book Prize

Fortune's a River is the most authoritative and readable account to date of just how British Columbia became British and how Oregon, Washington and Alaska became American. By the closing years of the 18th century, the stage was set for a major international confrontation over the Northwest Coast. Imperial Russia was firmly established in Alaska, Spain was extending its trade routes north from Mexico, Captain James Cook had claimed Northwest America for England and Captain Robert Gray had claimed the Columbia River region for the United States. Open warfare between Spain and England was narrowly averted during the Nootka Sound Controversy of 1789-1794, and again between Britain and the US in the War of 1812, when a British warship seized American property in Oregon.

In Fortune's a River, noted historian Barry Gough re-examines this Imperial struggle for possession of the future British Columbia and fully evokes its peculiar drama. It turned out the great powers were reluctant conquerors in this area. Russia and Spain withdrew of their own accord. Britain was in a position to dominate, but couldn't be bothered. The US vaguely wished to fulfill its manifest destiny by securing the Northwest Coast, but it was not a priority. In the end the battle was carried on by private enterprise and individuals of vision. Alexander Mackenzie established an overland route to the coast and with his partners Simon Fraser and David Thompson, set up a network of fur trading forts south to Oregon. US president Thomas Jefferson countered by sending out the Lewis and Clark expedition to strengthen American claims and an American entrepreneur, John Jacob Astor, established a lonely US outpost at Astoria. Gough examines each of the players in this territorial drama, bringing them fully to life and vividly recounting their hardships and struggles. Fortune's a River is a major historical work that reads like a wild west adventure.
Dr. Barry Gough was founding director of Canadian Studies at Wilfrid Laurier University and is a Fellow of the Royal Historical Society, Fellow of King's College London and Life Member of the Association of Canadian Studies. He is author of many critically acclaimed books, including Fortune's a River: The Collision of Empires in Northwest America (Harbour, 2007), which won the John Lyman Book Award for best Canadian naval and maritime history. Gough has been writing about the history of the Pacific Coast for almost four decades, and in 2016 he was named Honourary President of the BC Historical Federation. He lives in Victoria, BC, with his wife Marilyn.