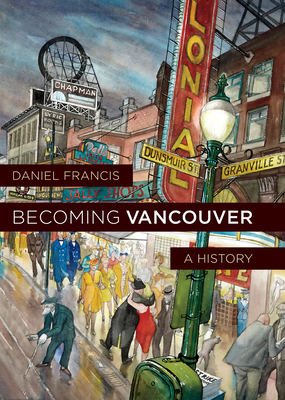 A brisk chronicle of Vancouver, BC, from early days to its emergence as a global metropolis, refracted through the events, characters and communities that have shaped the city.

In Becoming Vancouver award-winning historian Daniel Francis follows the evolution of the city from early habitation by the Musqueam, Squamish and Tsleil-Waututh First Nations, to the area's settlement as a mill town, to the flourishing speakeasies and brothels during the 1920s, to the years of poverty and protest during the 1930s followed by the long wartime and postwar boom, to the city's current status as real-estate investment choice of the global super-rich. Tracing decades of transformation, immigration and economic development, Francis examines the events and characters that have defined the city's geography, economy and politics.

Vancouver has been called a city without a history, partly because of its youth but also because of the way it seems to change so quickly. Newcomers to the city, arriving by the thousands every year, find few physical reminders of what was before, making a new history like Becoming Vancouver long overdue.