The Invasion of Canada: Battles of the War of 1812 (Paperback) 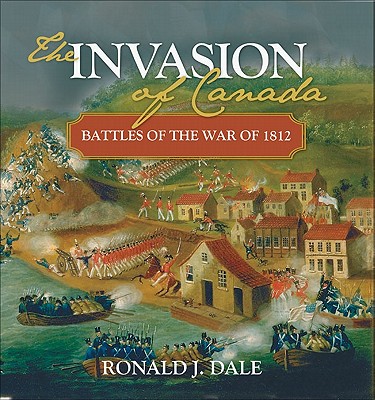 The Invasion of Canada: Battles of the War of 1812 (Paperback)


Special Order—Subject to Availability
On June 18, 1812, the United States declared war on Great Britain--the most powerful nation in the world. Britain was in the midst of a long and perilous struggle with Napoleon's France, convincing President Thomas Jefferson that taking Canada would be "a mere matter of marching."

Jefferson was terribly wrong. In this book Ron Dale traces the course of this gruelling two-year conflict, bringing to life people and engagements that have become legendary in Canada: General Brock's stand at Queenston Heights, Tecumseh's death at Moraviantown, Laura Secord's epic trek through the woods. He also recovers some equally important, but more obscure results of the conflict, including how the Bank of Nova Scotia was created with privateering prizes from the war.

Illustrated throughout with full-colour paintings and modern photography, The Invasion of Canada is a readable, appealing guide to a war that both sides won.
RONALD J. DALE is a historian and the Superintendent of Niagara National Historic Sites, including Fort George and Brock's Monument. He is the author of Niagara-on-the-Lake: Its Heritage and Its Festival, The Invasion of Canada: Battles of the War of 1812, and The Fall of New France: How the French lost a North American empire 1754-1763.