The Book of Small (Paperback) 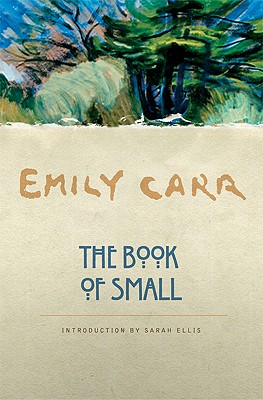 The Book of Small (Paperback)


Special Order—Subject to Availability
The legendary Emily Carr was primarily a painter, but she first gained recognition as an author. She wrote seven popular, critically acclaimed books about her journeys to remote Native communities and about her life as an artist--as well as her life as a small child in Victoria at the turn of the last century.
The Book of Small is a collection of 36 short stories about a childhood in a town that still had vestiges of its pioneer past. With an uncanny skill at bringing people to life, Emily Carr tells stories about her family, neighbours, friends and strangers--who run the gamut from genteel people in high society to disreputable frequenters of saloons--as well as an array of beloved pets. All are observed through the sharp eyes and ears of a young, ever-curious and irrepressible girl, and Carr's writing is a disarming combination of charm and devastating frankness.
Carr's writing is vital and direct, aware and poignant, and as well regarded today as when she was first published to both critical and popular acclaim. The Book of Small has been in print ever since its publication in 1942, and, like Klee Wyck, has been read and loved by a couple of generations.

Emily Carr was born in Victoria, British Columbia, in 1871, and died there in 1945. She studied art in San Francisco, London and Paris. Except for a period of fifteen years when she was discouraged by the reception to her work, she was a commited painter. After 1927, when she was encouraged by the praise of the Group of Seven, interest in her paintings grew and she gained recognition as one of Canada's most gifted artists. Now, nearly sixty years after her death, her reputation continues to grow.

There is an excellent website devoted to Emily Carr, her lift, her art and her writing, at http: //www.tbc.gov.bc.ca/culture/schoolnet/carr/

Sarah Ellis is an award-winning writer and children's librarian, as well as being a sought-after speaker at conferences and workshops throughout North America and Europe. She has taught children's literature at colleges and universities in Canada, the United States, Europe and Japan, and she has been a core lecturer and seminar leader at the Children's Literature New England conferences since 1993. Between 1984 and 1998 she was the regular columnist on Canadian children's books for Horn Book Magazine. She is also the humour editor for the electronic children's literature journal, The Looking Glass.

Ellis is the author of 13 books for young people, including the Governor General's Award-winning Pick-Up Sticks, Out of the Blue (winner of the IODE Violet Downey Book Award and the Mr. Christie's Book Award) and The Baby Project (published as The Family Project in the U.S. by Simon & Schuster and Dell). In 1995, she won the Vicky Metcalf Award for a Body of Work, and in 1999 she was the first children's author to be named Writer-in-Residence at Massey College at the University of Toronto.