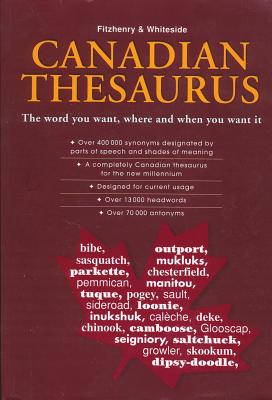 The word you want, where and when you want it.

Features of the Revised and Updated Edition include:

Look up the word district, for instance, and in addition to the usual synonyms and antonyms, the reader will find references to well-known neighbourhood districts such as Market Square in Saint John, Montreal's Balconville, Toronto's Cabbagetown and The Danforth, The Forks in Winnipeg, and Vancouver's Gastown, among others.

The listing for flower provides the reader with the name of the official flower of each Canadian province and territory. Look up motto, tree, or bird, and the provincial and territorial mottos, trees, and birds are there as well.

And what thesaurus could call itself even remotely Canadian without at least a baker's dozen of synonyms for donut?

Hudson Bay Coat, McLaughlin Buick, Bricklin, Zamboni? Yes, they're in here. So too are fiddlehead, Herring Choker, and Digby Chicken.

Other points on the making of the Fitzhenry and Whiteside Canadian Thesaurus:

Fitzhenry and Whiteside Canadian Thesaurus is the first Canadian reference book of its kind built - not from an existing database - but totally from scratch over a period of close to 12 years. 2. At more than 1200 pages, the book contains over 30,000 individual entries. 3. The book has been exhaustively cross-referenced against a wide range of Canadian language reference works including the Newfoundland and Prince Edward Island dictionaries and (more recently) the new Canadian Oxford, to name a few. 4. The book supplies the reader with more than 500,000 synonyms, plus some 70,000 antonyms and more shades of meaning than any of its competitors. 5. All synonyms are clearly labeled as to parts of speech, designated as formal or non-formal, and ranked by popularity of use. 6. Additionally, this thesaurus highlights 'kinds of' and 'groups of' words related to the initial key word, a feature seldom found in similar reference works. 7. This book is richly geographic in its attribution of origins. Whether the word in question was born in France, Germany, England, the Maritimes, the Canadian Prairies, or the Pacific coast, the reader will know. 8. As befits its title, the Canadian Thesaurus is jam-packed with Canadian references from A to Z. 9. The book is uniquely rich with references to Canada's First Peoples. 10. The Editorial Director of this project - Dr. J.K. Chambers, Professor of Linguistics at the University of Toronto - has served as Fitzhenry and Whiteside's editorial consultant on the ongoing Canadianization of the Funk and Wagnalls Canadian College Dictionary since 1980. Recently, he served as Canadian English Editorial Advisor on the new Canadian Oxford Dictionary (1998), and wrote the Preface to that best-selling volume. Dr. Chambers is internationally recognized as a pre-eminent authority on Canadian English and English language usage in Canada.
Richard Dionne is a veteran Canadian editor who is currently publisher of Red Deer Press. He holds a graduate degree in history from York University and lives in Cliffside, Toronto.