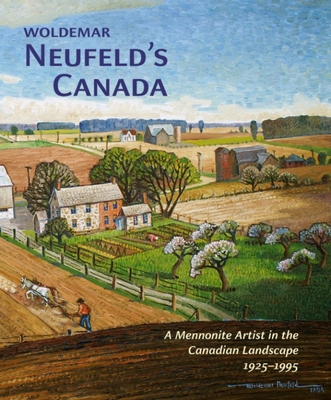 Woldemar Neufeld (1909-2002) emigrated with his Mennonite parents from Ukraine to Canada in 1924. By the late 1920s, he had begun his lifelong project as documentarist, responding especially to the built environment, whether close to his home in southern Ontario or farther afield: northern Ontario, the prairies and the west coast, the Maritimes and Quebec. His work passed through a number of styles, from the coolly abstract to the vividly "realistic." Although he never abandoned oils, he produced a substantial body of watercolours and block prints--the latter influenced by German Expressionist and Japanese printmaking approaches.

Woldemar Neufeld's Canada, a record of Neufeld's Canadian paintings and block prints, explores influences that shaped Neufeld's career as it developed in Canada during the 1920s and 1930s and came to fruition from 1940s to the 1990s. Early on, Neufeld came into contact with leading Canadian artists, from Homer Watson to members of the Group of Seven. During the 1930s, he began to participate in group and solo exhibitions, including a one-man show at the Vancouver Art Gallery. After studies in Cleveland, he settled in New York City (1945) and New England (1949). Until the 1990s, however, he continued to work in Canada, returning especially to document, in various media, urban and rural landscapes in southern Ontario.