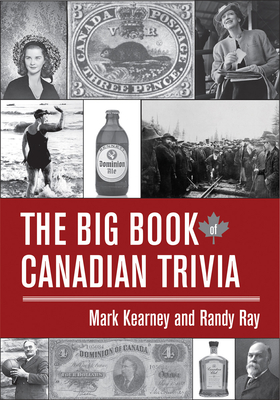 Here in one big book is all the trivia and facts about Canada anyone needs to know. The Big Book is jam-packed with facts and stories. There are stories of important Canadian artifacts and history including what became of Canada's World War II spy camp. All regions and provinces are covered, as well as important Canadian figures like John Molson, Elizabeth Arden and Russ Jackson. If that isn't enough there will also be pieces explaining whatever happened to such Canadian icons as the last spike, the first skidoo and the first Tim Hortons donut shop. Some of the items are classics. Others are little known facts. Approximately 25% of the material has never before appeared in print. This fascinating Big Book brings together for the first time in one package the most notable facts and trivia from the archives of the trivia guys' collection.

Mark Kearney and Randy Ray are the authors of Great Canadian Trivia 1 & 2, Pucks, Pablum and Pingoes and Whatever Happened to... Kearney lives in London. Ray lives in Ottawa.