In the Light of Justice: The Rise of Human Rights in Native America and the UN Declaration on the Rights of Indigenous Peoples (Paperback) 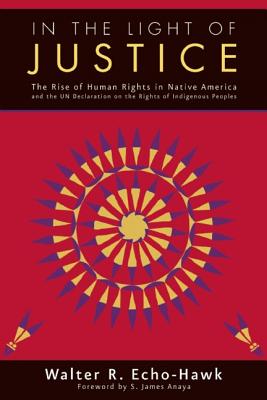 In the Light of Justice: The Rise of Human Rights in Native America and the UN Declaration on the Rights of Indigenous Peoples (Paperback)


Not On Our Shelves—Ships in 1-5 Days
In 2007 the United Nations approved the United Nations Declaration on the Rights of Indigenous Peoples. United States endorsement in 2010 ushered in a new era of Indian law and policy. This book highlights steps that the United States, as well as other nations, must take to provide a more just society and heal past injustices committed against indigenous peoples.
Walter R. Echo-Hawk (Pawnee) is of counsel to the Crowe & Dunlevy law firm of Oklahoma and adjunct Professor of Law at the University of Tulsa College of law. As a staff attorney for the NativAmerican Rights Fund for thirty-five years, he respresented tribes and Native Americans on significant legal issues during the modern era of federal Indian law. In addition to litigation, he worked on major legislation such as the Native American Graves Protection and Repatriation Act, and federal religious freedom legislation. He is a prolific writer whose books include In The Courts of the Conqueror: The 10 Worst Indian Law Cases Ever Decided and the award winning Battlefields and Burial Grounds.