When My Brother Was an Aztec (Paperback) 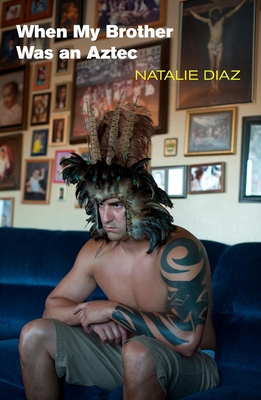 When My Brother Was an Aztec (Paperback)

I write hungry sentences, Natalie Diaz once explained in an interview, because they want more and more lyricism and imagery to satisfy them. This debut collection is a fast-paced tour of Mojave life and family narrative: A sister fights for or against a brother on meth, and everyone from Antigone, Houdini, Huitzilopochtli, and Jesus is invoked and invited to hash it out. These darkly humorous poems illuminate far corners of the heart, revealing teeth, tails, and more than a few dreams.

I watched a lion eat a man like a piece of fruit, peel tendons from fascia
like pith from rind, then lick the sweet meat from its hard core of bones.
The man had earned this feast and his own deliciousness by ringing a stick
against the lion's cage, calling out Here, Kitty Kitty, Meow

With one swipe of a paw much like a catcher's mitt with fangs, the lion
pulled the man into the cage, rattling his skeleton against the metal bars.

The lion didn't want to do it--
He didn't want to eat the man like a piece of fruit and he told the crowd
this: I only wanted some goddamn sleep . . .

Natalie Diaz was born and raised on the Fort Mojave Indian Reservation in Needles, California. After playing professional basketball for four years in Europe and Asia, Diaz returned to the states to complete her MFA at Old Dominion University. She lives in Surprise, Arizona, and is working to preserve the Mojave language.

Natalie Diaz: Natalie Diaz was born and raised on the Fort Mojave Indian Reservation in Needles, California. Having played professional basketball for four years in western Europe and Asia, Diaz returned to the states to complete her MFA at Old Dominion University in 2007. She has received the Nimrod/Hardman Pablo Neruda Prize and her work has appeared in numerous journals and magazines, including Prairie Schooner, Nimrod International, and North American Review. She lives in Surprise, Arizona.