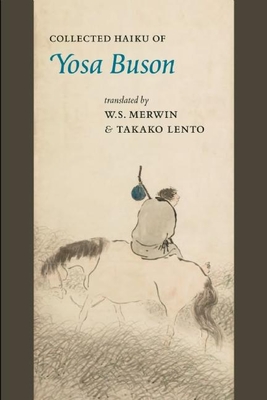 Lovers of haiku will rejoice at the arrival of this book, the first complete translation of the collected haiku of Yosa Buson...rendered into English with obvious care and devotion...Through Buson we realize what haiku is best at expressing--this moment's experience, bare facts, simple observations, elegant statements of 'thus-ness.'--Inquiring Mind

"Having W.S. Merwin and Takako Lento as co-translators of this book is close to ideal, and this is the best English translation of haiku that has ever been published. Their English translations are accurate and poetic and there is nothing better for introducing this great poet."--Donald Keene, Anahorish Japanese Literature

For a translator to be faithful and readable, as Mr. Merwin always is, is no small achievement.--The New York Times

From Latin to Russian to Japanese, translator W.S. Merwin]'s oeuvre suggests an intrepid quality as well as a scrutinizing sympathy.--Boston Review

This is the first complete bilingual (Japanese/English) translation of the Buson Kushu, a comprehensive collection of the haiku of Yosa Buson (1716-83). Buson's haiku brim with paradox: they are bawdy yet delicate, sparse yet powerful. W.S. Merwin and Takako Lento worked for a decade to co-translate these poems into English-language versions as luminous as the original Japanese. An essential volume of world literature.

Yosa Buson (1716-1783) was one of the great poets of Japan's Edo period. His work is technically adroit and finely attuned to visual details. A true maverick of interdisciplinary arts, Buson was also founder of the haiga--a small watercolor or black-and-white painting bordered by a haiku.

Co-translator Takako Lento holds an MFA in poetry and translation from the Iowa Writers' Workshop.

Yosa Buson: Yosa Buson (1716-1783) was one of the great haikuists of Japan's Edo period. His work is technically adroit and finely-attuned to visual details in a broad landscape. Although Buson's work shows some influence from his predecessor Basho, as well as from classical Chinese writers, the poems are wholly his own in their scope and sensuality. A true maverick of interdisciplinary arts, Buson was also one of founder of the haiga--a small watercolor or black-and-white painting bordered by a haiku. W.S. Merwin: W.S. Merwin, U.S. Poet Laureate from 2010-11, won the Pulitzer Prize for Poetry twice, most recently for The Shadow of Sirius (Copper Canyon, 2009), and the National Book Award for Migration: New and Selected Poems (Copper Canyon, 2005). Author and translator of over fifty books, Mr. Merwin lives in Hawaii and France. Takako Lento: Takako Lento has taught at universities in Japan and the United States. She holds an MFA in poetry and translation from the Iowa Writer's Workshop. Her publications include book-length Japanese translations of American writers as well as English translations of, and essays on, Japanese poets. She is a regular contributor to Poetry International Web.