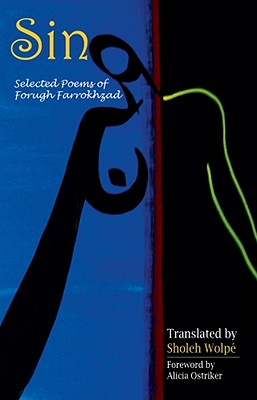 “In Wolpé’s fresh and vital translation, a musical and compelling English version that draws the reader along and captures a sense of the exquisitely balanced pacing of Farrokhzad’s language, and the immediacy and authenticity of her voice, the members of the Lois Roth jury found themselves experiencing Forugh’s Persian poems with new eyes. ”
—Excerpt from the Lois Roth judges’ award statement

Sin includes the entirety of Farrokhzad’s last book, numerous selections from her fourth and most enduring book, Reborn, and selections from her earlier work, and creates a collection that is true to the meaning, the intention, and the music of the original poems.

Sholeh Wolpé is an Iranian-American poet and playwright. Named a “2020-2021 Cultural Trailblazer” by the City of Los Angeles Department of Cultural Affairs, Wolpé is the recipient of the 2014 PEN/Heim, 2013 Midwest Book Award, 2010 Lois Roth Persian Translation prize. Her most recent books include Abacus of Loss: A Memoir in Verse, Keeping Time With Blue Hyacinth, The Conference of the Birds and Let Me In. Wolpé’s literary work number over twelve collections of poetry, books of translations, and anthologies, as well as several plays . She is the Writer-in-Residence at UC Irvine. More information: www.sholehwolpe.com
“Translated with deep admiration by Sholeh Wolpé, a poet fluent in both Persian and English, these lucid translations capture the absolute ferocity and passion that have made Forugh Farrokhzad so beloved and so infamous.”
—American Poet

“Poetic modernism came to Iran as late as the 1960s, when Farrokhzad (1935–1967) streaked across the literary horizon. . . . Of course, she became a scandal, one that endures to this day. . . . [T]he poems’ long lines and musical repetitions sweep the reader away as effectively as any American projective verse.”
—Booklist

“Potent . . . like certain works by Charles Wright or Seamus Heaney [these poems] are meticulously built to be precise and elusive at once. They reach outside of the poet’s own experience, beyond her headspace, her gender, her country of origin. Both pensive and urgent, they strive for the universe.”
—Lebanon Daily Star

“Farrokhzad is compared to Akhmatova and Plath. She’s their peer, and this is a magnificent book of beautifully wrought, distinctly modern poems.”
—Robert Covelli, The New Mexican Magazine