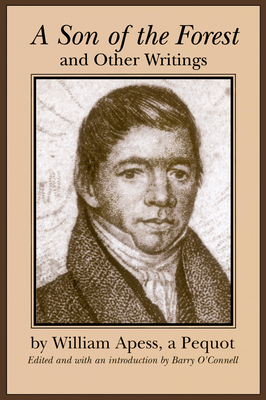 
Not On Our Shelves—Ships in 1-5 Days
Designed especially for classroom use, this book brings together the best-known works of the nineteenth-century Indian writer William Apess, including the first extended autobiography by a Native American. The text is drawn from On Our Own Ground, which was named a Choice Outstanding Academic Book. Barry O'Connell has written a new introduction for this abbreviated edition.
Barry O'Connell is professor of English at Amherst College. He is editor of Our Own Ground: The Complete Writings of William Apess, a Pequot, which is part of the series Native Americans of the Northeast: History, Culture, and the Contemporary, published by the University of Massachusetts Press.
"Makes available in a superb scholarly edition not only the first published autobiography by a Native American (1829 originally), but also a range of historical, political, and personal writings. The anger in Apess's work, . . . always eloquent, serves a depth of analysis and a layered irony that make pressing claims on any catalog of what is finest and most significant in American literary history."—New York Times Book Review

"The appearance of this volume brings to center state a writer of great importance and power, the first Native American to speak fully in his own words about the appalling racism of the early republic. . . . With the publication of this work, those who care about what passes for nineteenth-century American literature can never be the same."—New England Quarterly

"A milestone in the evolution of American literary and historical scholarship. By bringing Apess's voice before the public, Barry O'Connell has both broadened our understanding of the literary canon and extended our definition of Native American history....This book should be a part of any library of American letters."—Frederick E. Hoxie, Director, D'Arcy McNickle Center for the History of the American Indian, Newberry Library