A House Is Not a Home (Paperback) 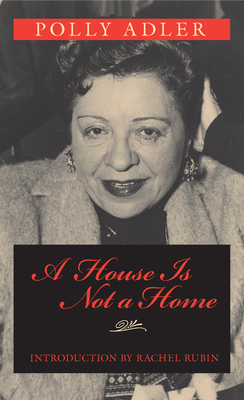 A House Is Not a Home (Paperback)


Not On Our Shelves—Ships in 1-5 Days
Polly Adler's "house"—the brothel that gave this best-selling 1953 autobiography its title—was a major site of New York City underworld activity from the 1920s through the 1940s. Adler's notorious Lexington Avenue house of prostitution functioned as a sort of social club for New York's gangsters and a variety of other celebrities, including Robert Benchley and his friend Dorothy Parker. According to one New York tabloid, it made Adler's name "synonymous with sin."

This new edition of Adler's autobiography brings back into print a book that was a mass phenomenon, in both hardback and paperback, when it was first published. A self-consciously literary work, A House Is Not a Home provides an informal social history of immigrant mobility, prostitution, Jewish life in New York, police dishonesty, the "white slavery" scare of the early twentieth century, and political corruption.

Adler's story fills an important gap in the history of immigrant life, urban experience, and organized crime in New York City. While most other accounts of the New York underworld focus on the lives of men, from Herbert Asbury's Gangs of New York through more recent works on Jewish and Italian gangsters, this book brings women's lives and problems to the forefront.

A House Is Not a Home is compellingly readable and was popular enough to draw Hollywood's attention in the early 1960s—leading to a film starring Shelley Winters as Adler. The book has been largely forgotten in the ensuing decades, lost both to its initial audience of general readers and to scholars in women's studies, immigration history, and autobiography who are likely to find it a treasure trove. Now, with a new introduction by Rachel Rubin that contextualizes Adler's life and literary achievement, A House Is Not a Home is again available to the many readers who have come to understand such "marginal" life stories as a special refraction of the more typical American success narrative.
Polly Adler was born in Yanow on the Russian/Polish border in 1900, immigrated to New York City in 1912, and died in California in 1962. Rachel Rubin is associate professor of American studies at the University of Massachusetts Boston and author of Jewish Gangsters of Modern Literature.
"This is a truly important contribution to American history—in many fields: immigration, women's history, urban history, and cultural history. Rubin's introduction is wonderfully written and surveys, thematically, all the issues that should be covered."—Ruth Rosen, author of Lost Sisterhood: Prostitution in America, 1900–1918

"Rubin's introduction to this book is a major contribution to scholarship because it rescues from oblivion a vibrant and compelling immigrant story, presenting it from a new vantage point and allowing the reader to see the contradictions of the period Polly Adler lived through within a broadly painted historical context."—Elizabeth Ewen, author of Immigrant Women in the Land of Dollars: