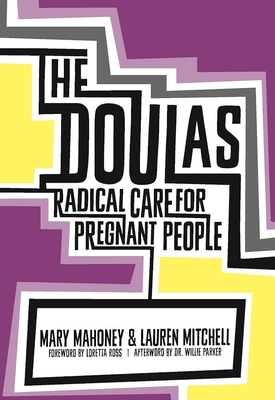 
Backordered
Weaving together how-to manual, activist memoir, and manifesto, The Doulas is an "honest, raw, and charged" treatise on full-spectrum doula care. (Rewire)As more feminist conversation migrates online, the activist providers of the Doula Project remain focused on life's physically intimate relationships: between caregivers and patients, parents and pregnancy, individuals and their own bodies. They are committed to supporting a pregnancy no matter the outcome--whether it results in birth, abortion, miscarriage, or adoption--and to facing the question of choice head-on. In this eye-opening book, Doula Project founders Mary Mahoney and Lauren Mitchell present the history, philosophy, and practices of these caregivers, contextualizing the doula movement within the larger scope of pregnancy care and reproductive rights. They illustrate how, through their unique hands-on activism, full-spectrum doulas provide tangible support for those confronting life, death, and the sticky in-between.
Mary Mahoney, LMSW, is a full spectrum doula and Founder and Board Co-Chair of The Doula Project. She has served hundreds of pregnant people across the spectrum of choice and trained activists, doulas, clinicians, and medical students around the country on the abortion doula model of care. Mary is the former Assistant Director of the Pro-Choice Public Education Project, and a graduate of the Silberman School of Social Work at Hunter College. She is currently a licensed social worker, focused on the intersection of trauma and child development. Over the past eight years, Mary has been a key player in several reproductive justice-focused coalitions and think tanks. In one notable role, she was appointed to the Women's Health and Leadership Network at the Center for American Progress in 2010 where she, as the sole service provider, helped inform national reproductive and economic justice policy. Mary has published pieces for the Center for American Progress and RH Reality Check and contributed to several reproductive justice briefing books and research reports, including On Our Terms: Young Women of Color, Reproductive Justice, and Activism and the Reproductive Justice Briefing Book: A Primer on Reproductive Justice and Social Change. She has spoken about reproductive justice and full spectrum doula care at conferences and workshops around the country. Mary is currently based in Williamsburg, Brooklyn, New York. Lauren Mitchell, M.S., has been working to change the culture of medicine for the better part of a decade. In addition to being a full-spectrum doula and founder of The Doula Project, she is a certified Gynecological Teaching Associate, teaching medical and nurse practitioner students to be able to perform gentle, patient-centered physical examinations, and a teacher of literature and the humanities in medical school settings. As a co-coordinator of the Reproductive Choices Service of New York City's largest public hospital, she has been able to infuse an extremely medicalized system with compassionate patient care. She is a graduate of the Narrative Medicine program at Columbia University, and is currently pursuing a PhD in medical humanities at Vanderbilt. Lauren is a well-known and established speaker and trainer in the fields of reproductive justice and medical humanities, and has presented for a wide variety of organizations including NAF, NAPW, the Abortion Access Network, NOW (National and Regional Summits), FemSex, Hampshire College, Columbia University, the Barnard Center for Research on Women, among many others. She currently lives in Nashville, TN. Human and women's rights activist Loretta Ross co-founded and served as National Coordinator of the SisterSong Women of Color Reproductive Justice Collective, a network that organizes women of color in the reproductive justice movement. In fact, Ross is one of the creators of the term Reproductive Justice, which envelops human rights and social justice into one movement. In 2004, Ross served as National Co-Director of the March for Women's Lives in Washington DC. It became the largest protest march in US history with more than one million participants. Ross is the co-author of Undivided Rights: Women of Color Organize for Reproductive Justice and author of "The Color of Choice" chapter in Incite! Women of Color Against Violence published in 2006. She has also written extensively on the history of African American women and reproductive justice activism.