Fire Fighters: Stories of Survival from the Front Lines of Firefighting (Adrenaline) (Paperback) 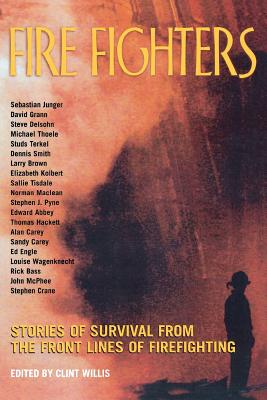 Fire Fighters: Stories of Survival from the Front Lines of Firefighting (Adrenaline) (Paperback)


Not On Our Shelves—Ships in 1-5 Days
Firefighters have long been among the most admired men and women in our culture, and recent events have shown how well-placed that admiration is—adding fuel to our innate fascination with stories about fire and the people who risk their lives to fight it. Some of our best writers are drawn to the subject of firefighting, and over the years they have created a rich body of literature. Fire Fighters offers the most exciting and compelling stories from that body of work, including accounts of devastating fires from New York to Yellowstone, as well as smaller blazes that have turned particularly ugly or dangerous. Selections include Jimmy Breslin's eulogy for the men who died in the famous Chelsea fire, Norman McLean on the Great Gulch forest fire that killed nine young smokejumpers, John McPhee on fires in the Pine Barrens, Studs Terkel's interview with a fire fighter, and riveting accounts of the FDNY's role in the September 11 tragedy and its aftermath. 16 black-and-white photos are also featured.
Clint Willis has published more than forty books, including anthologies on topics such as adventure, politics, relgion, and war. His work has appeared in hundreds of publications, including Men's Journal, Outside, and the New York Times. His work has also been nominated for the American Society of Magazine Editors' National Magazine Award.