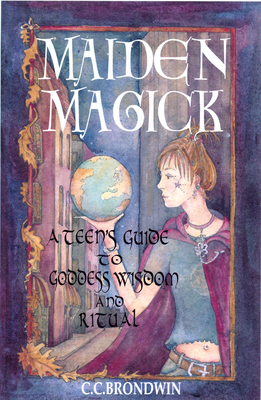 
Special Order—Subject to Availability
“By the end of Maiden Magick, the young woman has been armed, initiated, and guided to be a magical maiden, not just for the Goddess but also for herself and the world around her. For any young girl coming of age, Maiden Magick is a great tool.”—Foreword

Chock full of Goddess information, personal encouragement, and humor, Maiden Magick speaks directly to the teen reader, embracing and honoring her as a true Spiritual Seeker drawn to the Goddess tradition and eager to learn to walk her path. But where does the reader begin her journey? What does it mean to become a Celtic spiritual apprentice, to conjure effective spells, write chants, or cast blessings? And how does a teen effectively practice her newfound magick skills and still balance her serious responsibilities as a young woman while following the Goddess way?

Maiden Magick answers that often-voiced need from today's teens for a clear, step-by-step guidebook to Goddess spirituality and Celtic magick. Author C.C. Brondwin was raised by healers and mystics in the ancient Clan tradition, and she learned her craft as it was handed down from mother-to-daughter.

Maiden Magick encourages the teen apprentice to believe in herself and her own natural powers, and to walk the Goddess path with confidence by:
C.C. Brondwin is proudly a Celtic crone. She is an award-winning national broadcaster, journalist, and former university executive who returned to her roots. A natural teacher and counselor, who also leads Goddess empowerment workshops, Brondwin is the author of Clan of the Goddess: Celtic Wisdom and Ritual for Women.

"For any young girl coming of age, Maiden Magick is a great tool." -- ForeWord magazine
— Reviews