Walking With the Green Man: Father of the Forest, Spirit of Nature (Paperback) 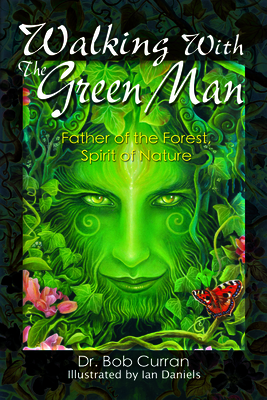 Walking With the Green Man: Father of the Forest, Spirit of Nature (Paperback)


Special Order—Subject to Availability
Almost since the dawn of time, the image of the Green Man--the carven enigmatic head surrounded by leaves and foliage--has both intrigued and mystified viewers and folklorists alike. Appearing in churches, taverns, and even on stately buildings, the carving seems shrouded in supernatural obscurity. Is it merely a fertility symbol, or is it something much deeper, which calls for a response from us all? Though it seems a predominantly Celtic icon, does the concept of the Green Man also appear in other places and in other cultures? What is its relevance for the world today? In an absorbing new book, Dr. Bob Curran traces the many strands that make up this enigmatic image. Tracing its origins from prehistoric times, he explores its significance in the medieval world and discusses its development in the modern world. He also investigates the image's psychological appeal, which has allowed it to continue down through the ages, and, pulling from a variety of sources, its impact upon other cultures in various parts of the world. From heroic archetypes such as Robin Hood to Demigods such as Herne the Hunter; from the King of the Woods to the Jack in the Green, Walking With the Green Man examines the interconnection of man and Nature throughout history. Whether as a man amongst the trees, a man of the trees, or a symbol of Nature used to express secrets and solidarity, the Green Man's visage is traced throughout lands and cultures. Walking With the Green Man will appeal to all those who are interested in the image of the Green Man as an example of symbolic art, as well as to those who are interested in folklore and the interplay between folklore and culture. It is a fascinating study, which not only examines the history of the icon but also its development within human perception.
Dr. Bob Curran is a native of Northern Ireland, born and raised in the Mourne Mountains area of County Down, a region steeped in folklore and legend. Throughout a varied life, he has worked in many fields--as a gravedigger, professional musician, journalist, and civil servant. He is now a history teacher and well known throughout Ireland and beyond as a writer and broadcaster. He has written extensively, in English and several other languages, on various aspects of history and folklore and acted as advisor to the Cultural Committee of the Northern Ireland Legislative Assembly. He currently lives in Coleraine, County Derry, with his wife and family.
Ian Daniels's illustration projects include Vampires, Encyclopedia of the Undead, Dragonlore (all New Page Books), Classic Celtic Fairytales, and Tales of the Celtic Otherword. He has illustrated book covers for Marion Zimmer Bradley, Orson Scott Card, and Poul Anderson.