The Earth Moved: On the Remarkable Achievements of Earthworms (Paperback) 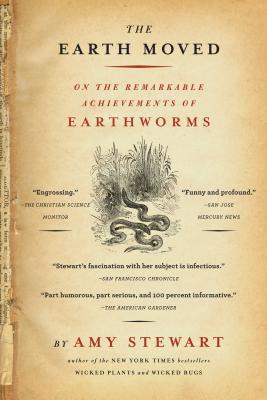 The Earth Moved: On the Remarkable Achievements of Earthworms (Paperback)


Not On Our Shelves—Ships in 1-5 Days
"You know a book is good when you actually welcome one of those howling days of wind and sleet that makes going out next to impossible." —The New York Times

In The Earth Moved, Amy Stewart takes us on a journey through the underground world and introduces us to one of its most amazing denizens. The earthworm may be small, spineless, and blind, but its impact on the ecosystem is profound. It ploughs the soil, fights plant diseases, cleans up pollution, and turns ordinary dirt into fertile land. Who knew?

In her witty, offbeat style, Stewart shows that much depends on the actions of the lowly worm. Charles Darwin devoted his last years to the meticulous study of these creatures, praising their remarkable abilities. With the august scientist as her inspiration, Stewart investigates the worm's subterranean realm, talks to oligochaetologists—the unsung heroes of earthworm science—who have devoted their lives to unearthing the complex life beneath our feet, and observes the thousands of worms in her own garden. From the legendary giant Australian worm that stretches to ten feet in length to the modest nightcrawler that wormed its way into the heart of Darwin's last book to the energetic red wigglers in Stewart's compost bin, The Earth Moved gives worms their due and exposes their hidden and extraordinary universe. This book is for all of us who appreciate Mother Nature's creatures, no matter how humble.

Amy Stewart is the award-winning author of six books on the perils and pleasures of the natural world. She is the cofounder of the popular blog Garden Rant and is a contributing editor at Fine Gardening magazine. She and her husband live in Eureka, California, where they own an antiquarian bookstore called Eureka Books.